Here's The Hall Monitors clip that I forgot to post earlier. Divot.

Posted by Lindsay Hutton at 2:26 PM No comments:

So I've been catching up on reading bulletins and whathaveyou. Time I'll never get back I know but I seem to be hell bent on consuming this stuff y'know... my funeral and all that. There's all this stuff about Boner and his crew and how they (allegedly) have musicians under the stage to fatten out their sound. Far as it goes, anybody who buys into that shit deserves to be taken. At this point, let me state that I know people with perfectly reasonable taste (usually) that like this guff. I don't understand it and I won't judge. Stop sniggering.

What I'm getting to though is the illusion of perception. It's about making an audience believe and if a band can mime and dupe an audience into having a damn fine time then wtf. There's a little Milli Vanilli in all of us when it comes to the business of show. If you go to one of these stadium fiascos then chances are that what you're getting has to be doctored to fit such terrain. The good lord knows that sound doesn't have to be perfect but please, leave the enormodomes to those that deserve them. Support and cherish venues like Stereo and Sleazy's in Glasgow, Debaser (both) in Stockholm, El Sol and The Wurlitzer Ballroom (Madrid), Sidecar (Barcelona) and scores more. You know where they are and what you mean.

The corporations don't need any more money (well actually they do but fuck 'em - they just squander it) so support the smaller, more-deserving, unique aspects of great music. Whenever and wherever you can. Because if we don't then we're really gonna miss it when it's gone.
Posted by Lindsay Hutton at 1:22 PM No comments:

I had never heard this before but thanks to the turbo-charged Yum Yums version on "Sweetest Candy", I have now... and I figured that, if you didn't hear it then you'd certainly want to. Or wait, maybe you prefer it like this...

You can't deny the potency of the song...
Posted by Lindsay Hutton at 11:18 AM No comments: 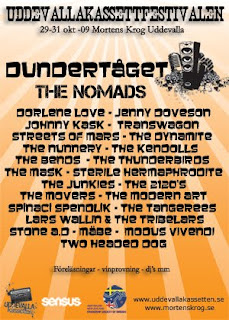 The Nomads and Dundertåget in Uddevalla tonight! Ungawa!!
Posted by Lindsay Hutton at 10:56 AM No comments: 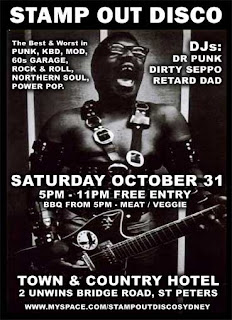 Posted by Lindsay Hutton at 7:47 AM No comments:

Celebrate 30 Years of the wonderful Pet Sounds Record Store in Stockholm. (I just typed Scotland, wishful thinking I guess). God only knows what we'd have done without it. This book by our departed brother, Lennart was launched the other night in that great city with a shindig attended by local dignitaries. Thanks to the very Rev. Nick V for the info.