Just found this on the Hot Rods myspace...

"Hello people and a happy new year to one and all . Some of the shall we say older Hotrods fans will remember back in the late 1970's Eddie and the Hotrods toured with Squeeze and The Radio Stars as the support acts, now some 30 odd years later the Radio Stars are once again playing alongside the Hotrods at the 100 club in London on Friday January 22nd.

If all goes well a UK tour may well be booked.It will be great to see you all there for what looks like being a really good night".

And what with the Dr. Feelgood documentary opening on February 2nd then maybe we can expect some kind of music explosion to happen this coming Autumn? Prob'ly not though but it's sometimes good to display misguided hope, right?
Posted by Lindsay Hutton at 3:07 PM No comments: 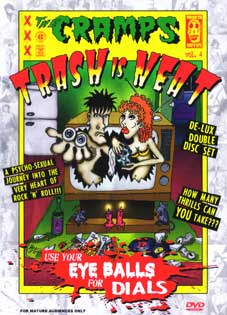 So we’re what? A month away from a whole year since Lux departed the earth? Hard to fathom. And even more confusing if you’re lucky enough to get your hands on Trash Is Neat 4. A fan-made challenge that compiles clips in celebration of the band that altered the course of so many histories and an amazing time capsule with a 170 minute run time split across two discs.

When (or most likely if) - an actual documentary is ever made, it quite possibly won't hang together half as well. Watching this was an emotional rollercoaster. Assembled with the same mentality as I tried to bring to the LOTC all those moons ago, if the technology had been available, this would have beed a dvd edition of Rockin' Bones. The time, effort and spirit of the enclave responsible is as “tireless and passionate” as the big guy once said that the fan club was. I should drag that out and scan it one of these days. Is it just me or does that sound like a line from Ultra Twist?

It was odd seeing the later shows, the last one I ever saw was at The Paradiso in Amsterdam and it wasn't, in my opinion, great. Especially when sandwiched between two of my other favourite groups of all time, The Fleshtones and The Nomads. Of course, the reason was Slim Chance and Harry Drumdini. I wish I’d seen them with Bill Bateman, the only man who could actually follow Nick Knox and who is arguably much more practiced in the art.

The flame is well and truly burning here and if you want to try and score one of these beasties then I believe instructions to do just that will be available at the Staysick board later tonight. You need to be a member of this hallowed community and you should be warned right now that it’s a staunch church. Not populated by flakes like so many of these other “groups” you might have signed up for on the interweb.

TIN#4 is both celebration and tribute. Much of which I hadn’t seen – some that I had, but it’s been put together with a lot of love and understanding. Peace too maybe. Unless Ivy decides to commission and steer the definitive story then this is the closest you’re likely to come.

This will NEVER be commercially available for sale and it’s an enormous credit to all concerned. Nothing at all to do with yours truly before anybody asks. The staysick hardcore took up the baton and have come up with something that could only have been but together by true believers. To be enjoyed by those who understand that this band that gave the world far more than The Beatles, The Stones and Dylan combined.