The Human League, The Proclaimers and… The Woggles were among the entertainers that hit up Edinburgh last night. I dragged my arse, through the birdshit canopy that is the underside of the train tracks along the Calton Road to Studio 24 for the latter but due to a coughing fit, I didn’t stay until the end. The venue was bloody Baltic and figure the cold and the smoke must have triggered something to make me feel decidedly gubbed. Anyways, the instro-mental stylings of Preston Pfanz and the Seaton Sands kicked things off quite nattily. With a perfectly measured set both in tuneage and length. Other combos could do well to take a leaf out of their book. I saw The Woggles once before, opening for the very wonderful Girl Trouble in San Francisco. Their Fleshtones approximation disturbed me then and it does so now. It makes me pine for the real super-rock deal and as entertaining as these Atlanta chaps can be, they’re not Zaremba, Streng, Milhiser and Fox. Throwing all the ‘tone shapes, The Woggles work hard but I detect little of themselves in their g*r*ge-r*ck pantomime. These are the Great Grandchildren of Nuggets and the crazy paving to the big burny fire is festooned with good intentions. Sometimes though, that ain't enough.

Preston Pfanz and The Seaton Sands have a 45 available on Forth Bridge Recordings. comprising "Knock Hill Chicane" and "Forth Dimension". The Valves claimed there was "no surf in Portobello", well - there's a fair head of twang to be had in close proximity some 28 years later.
Posted by Lindsay Hutton at 5:35 PM No comments: 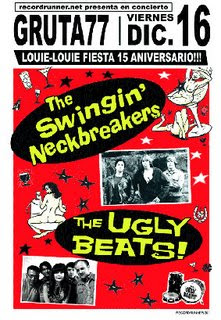 Posted by Lindsay Hutton at 6:29 AM No comments:

"Hey folks
Jingle balls'n'bells to all you goodly people, especially Andrew & Lisa Perry, lovebirds of this parish, who recently tied the knot! Huzzah!
Saturday the 17th is set for the Sonic Reducer Xmess Thang, a riot of tinsel, bonhomie, alcoholic beverages, and twisted festive funk, soul, garage, punk, soul'n'junk 45s. Expect a snow-capped mountain of tuneage, including Clarence Carter's Back Door Santa, The Sonics' Santa Claus, Otis Redding's White Christmas, Fountains Of Wayne's I Want An Alien For Christmas, and TWO versions of the cockle-warming Christmas In Vietnam (neither by G Glitter!) ...
Our guest spinner for Old Saint Nick's fave hoedown of any annum is Tony 'The Folkie' Bailey, one of yer ever-lovin' SR crew's oldest and bestest friends, and he'll be dishing top drawer 45s from his legendary stash, kept under maximum security at a secret lair, high above the Holloway Road.
Truly, Jambo don't come no better, bar none ...
This Saturday will also mark BigKegShandy's birthday, and you're all invited to come and take the piss out of his increasingly Ray Reardon-ish hairline ... Tips on superior hairpiece manufacturers, under plain cover, will be gratefully accepted ...
If we don't see you at the bar, have a kool yule, and gear noo yerr ...