I haven’t seen this performance by “The Who” that took place during the Superbowl. Nor do I really want to. However, the fact that it maybe wasn’t up to scratch seems to have surprised and even horrified people. Are individuals really still so naïve as to think that any semblance of glory can be retained by a couple of guys who patently didn’t do what they sang about all those years ago? I remarked to a colleague this morning about how none of us are getting any younger. A couple of stark examples of this have presented this to me in IMAX terms these past few days.

The “live” performance is a peculiar beast. You’re never sure who is doing it for real or who is miming. There are two aspects to this. Making the people who are believe and react, to entertain them. We’ve all been at shows with hairy sound and all kinds of problems but it rises above and becomes an experience. Then there’s the almost mechanical, wheel on – wheel off “performance” that never differs. This is more akin to a theatre production with a very slim margin for any possible error. The latter seldom results in rousing the rabble. When I see the barrier between an act and the audience in most venues, it automatically makes my heart sink.

Rock’n’roll and health and safety are like oil and water. If you extract the “danger” then chances are that the ignition required will fail to take place. I feel the same about lengths of set and the number of bands on any given bill. My own opinion is that there should be not more than two bands. Any more than that and it qualifies as a festival. And also, do 20 or 25 minutes and leave me wanting more. Don’t risk 35, because chances are that it ain’t happening. This may be interpreted as harsh but fuck it. Let’s have that line in the sand be recognised because time, despite what Mick Jagger claimed übermoons ago, is not on the side of any of us.

It is the most precious commodity known to mankind and the supply is running out. Conserve it and use it wisely. No point in concerning ourselves with the pros and manifold cons of the new facebook format. We have to deal with it or shut the bloody thing off.

Almost as irritating as the unsolicited links and mp3s I get sent are the URLs that I send to myself. At the time with all the good intentions of reading them only to be deleted 3 weeks later when I realise that if I do that then what about the others. Trying to be selective is all very well but it doesn’t work for me. My head seems to be a lot more scrambled these days. Yes, I realise that might come as a shock – followed by the question – how could it be?

Writing these days too provides cause for concern because I’m all written out. Sometimes it’s easier than others but essentially I am pathologically opposed to trotting out the same information each time. This manifests itself in log jams. It tests loyalties and ultimately responsibility. Not that I have much experience of the latter recently.

Obligation has no significance in objectivity. It’s a bit like compromise. The problem with so much stuff these days is that nobody is prepared to offer opinion for fear of causing offense. Or appearing to go against the preferred tide. This isn’t a good foundation. Subjective objectivity on the other hand is something that always comes in useful. That and only kicking something to death in print to create a perspective. Ha ha.

I’ve heard some unbelievably average albums and "music" recently and some that I really, in all honesty, can’t bring myself to feature in any way shape or form. There are others that I want to do something with but haven’t come up for air. There’s no schedule – it all just happens. Sometimes the queue can be jumped. Let’s just leave it at that. You don't grudge a guy in his dotage that - surely?

Sort of went off on several there, must have been needing to vent...
Posted by Lindsay Hutton at 6:24 PM 3 comments: 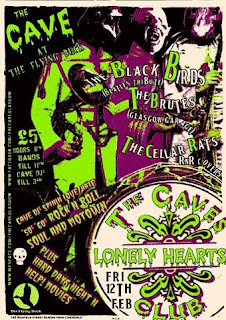 Mr Spence wishes it to be known...

"The Brutes are outta hibernation and tearing up THE CAVE at the Flying Duck, Glasgow this Friday (12th Feb). Headliners are the Blackbirds - a Beatles covers band.

Feel free to come w/ polystyrene rocks in yer pockets, and
re-enact Johnny Ramone's visit to Shea Stadium for the real Beatles back in the day! Even tho' it's a club night, bands are on pretty early (8 til 11).

So come on out and stamp on a Beatle!!!"
Posted by Lindsay Hutton at 6:08 PM No comments: 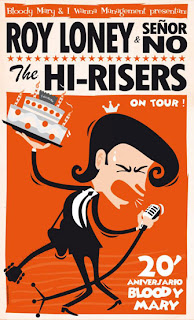 The inimitable Roy Loney is in Spain this week with The High Risers.