Next weekend we have the gigundo record fair here in town once again. If you're headin' this way, you might wanna check the festivities at the dB‘s club on saturday night featuring London's mighty Blacktime trio and Jeff Conolly's Teringlyres...
Posted by Jeroen Vedder at 10:28 PM No comments:

Nick Vahlberg just gave me the heads up that another Swedish institution is selling up. Gunnar Johansson's WILD and WICKED has a blow out, closing sale that includes records, posters and other hard to get stuff at super bargain prices. Check it out!
Posted by Lindsay Hutton at 7:37 PM No comments: 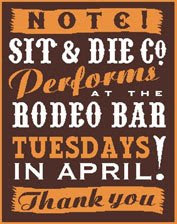 Susquehanna Industrial Tool & Die returns to the Rodeo Bar for more rootin', tootin' Tuesday shenanigans, friend, but shall we see YOU there? We hope the answer is a resounding "quite possibly". Sincerely, Michael
Posted by Lindsay Hutton at 6:45 PM No comments: 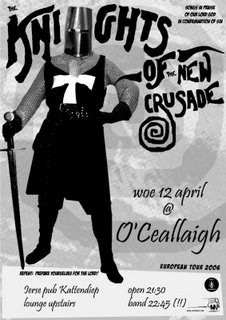 April 12: O'Ceallaigh in Groningen. Open 21:30, band on at 22:45.
Posted by Jeroen Vedder at 6:32 PM No comments:
So yeah, a few bits and pieces here that should keep you back from doing what you ought to be doing. Like chores, etc.

I recently discovered a guy called MC Lars who is playing at King Tuts in Glasgow tomorrow night. I was gonna roll along to see him but the show has been sold out for weeks. Seems like the bush telegraph still works. Anyway, it’s savvy, funny and completely irreverent. Punk flavoured Hip hop for people who don't necessary relate to that demographic as a rule. Hear him for yourself.

The great Richard Stim has been making his presence felt at YouTube. He has 4 films on there including one of his commute between Sutro Heights and Berkeley and also the clip for MX80’s “We’re An American Band”. Neither you or I are worthy of his genius.

The long awaited second Yayhoos album is just about to come out on the Lakeside Lounge imprint. You can hear every cut on “Put The Hammer Down” at their site. The album will only be available via that portal and at shows. What are you waitin’ for?
Posted by Lindsay Hutton at 4:45 PM No comments: 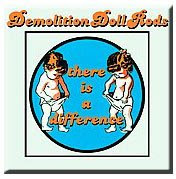 The release date of this latest epistle is April 18th but if you’re lucky enough to be in the vicinity of their European shows then maybe you can score a copy upfront of that? The word that separates the DDR from the host of post-Cramps combos is undulate. Their mutant primal blues undulates like the former throbs. They’re possessed by a spirit of undiluted entertainment and this new album on Swami goes a long way to capturing what I imagine that they bring down upon an audience in the, er, flesh. “There Is A Difference” is a great title because it tells it like it is. This isn’t an easy strain of “music” to carry off but you know that these folks mean it. They pummel their Motor City gospel out and you can either go with ‘em or get the heck outta their way because they patently don’t care. There’s an inherent soul in what DDR do, “Lil’ Naked” is a brooding rough diamond of an anthem. It precedes a run through Donnie Elbert’s “Little Piece of Leather” which isn’t an easy song to treat right. There’s a glam transfusion at the intersection of where the NY Dolls headed up Devilgate Drive to the cross street marked Fleshtones. The production offers an olive branch to passers-by that are drawn to the ruckus. It’s cohesive and maybe even radio-friendly without sacrificing an inch of what makes them unique. They even offer up a version of “Amazing Grace" for chrissakes. Viva le “difference” indeed.
Posted by Lindsay Hutton at 1:59 PM 2 comments:
Whoa Dad! From The Count Bishops' French fan site: "Denis Vaughan is presently booking dates for The COUNT BISHOPS Tour in Europe for May and June 2006. The line up of band will be original including Dave TICE, Johnny GUITAR, Pat McMULLEN, Paul BALBI. Chiswick Records intend to release a new CD/DVD to coincide with the tour".
Posted by Jeroen Vedder at 12:06 AM No comments:
Newer Posts Older Posts Home
Subscribe to: Posts (Atom)