More kicks! The Hoodoo Gurus and Feel Presents bestowed upon us another day of rock ‘n’ roll thrills for which all who attended will be eternally grateful. Last year’s knees-up was such a hoot that the excitement and anticipation preceding Round 2 was undeniable.


And so to roll call…


The Enmore hosted the main stage and to open proceedings we got Tumbleweed. Australia’s genuine stoner-rock heroes of the 90’s and Waterfront Records stars are back in action. A good choice to open the show, with a solid mix of new tunes and hits, they cleared the eardrums nicely. 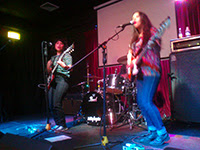 I’d wanted to see Peter Case for many years. The former Nerve, Plimsouls leader and long-term folk/roots rock troubadour has a clutch of wonderful songs to his credit so we got a suitably mixed set. Soaring heights were scaled by “How Long Will it Take” and “A Million Miles Away”.


Many of the thrills were away from the main arena… A personal highlight was the Frowning Clouds set in the Sly Fox Hotel. No longer the purist r’n’b/ Stones/ garage hybrid of a couple of years back, they now seem to have embraced a much broader and wilder palette of sounds and influences while maintaining the essence of what made them great in the first place. A wonderful 45 minutes.


At the same venue, Bloods, a three-piece with two girls up front on guitar and bass and a guy holding down the backbeat, have an exuberant presence and deliver a really fun, primal rockin’ set. They have the chops, the songs and the delivery and were a surprise highlight. 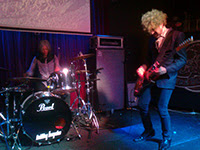 Kim Salmon and Leanne Cowie were incredible. Kim is the scuzz-king of rock and delivered a performance for the ages. Damn loud and absolutely wild, they delivered material from across the Scientists catalogue, including ”Frantic Romantic”, “Swampland” and loads more first-rate stuff.


The Laurels created some beautiful sonic landscapes with an over-driven guitar sound, washes of feedback and effects to colour their music. Another winner.
Meanwhile, back in the Enmore Theatre, The Lime Spiders delivered a solid set of covers and originals though it was all a tad hard rock and not enough wild fuzzy abandon for me.


Having seen only the mid-80’s version of the Groovies back in ’86 I was super excited to have the opportunity of seeing them again, 27 years later, but this time with the nucleus of the classic 70’s line-up – Chris Wilson joining mainstays Cyril Jordan and George Alexander. They didn’t really get groovy until the opening notes of “You Tore Me Down” more than halfway through their set but that was glorious and between this and the much anticipated and duly delivered closer, “Shake Some Action”, we got moments to treasure.


Amongst a few other acts playing away from the main stage that I regrettably missed, I also somehow didn’t get to see any of Blue Oyster Cult's show. Reports indicated it was a mixed bag of sonic, rockist splendour and some Toto-esque moments.


And so to our hosts, the Gurus. Last year, despite playing all of “Stoneage Romeos”, I thought their set was lacking something in delivery and sound. This time we got “Mars Needs Guitars” followed by a selection of their super hits and they hit all the sweet spots. Brad Shepherd was the guitar hero and his riffs and solos were spiky and note-perfect. And Dave, Mark and Rick delivered with gusto. It was a great performance and the perfect finale. An encore of “Teenage Head” with Cyril and Chris was a nice way to send us home.


Another huge day of big fun. Bring on Dig It Up 3. 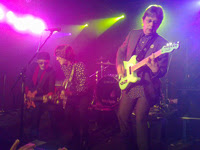 
The Groovies side-show on the Tuesday following Dig It Up was ace!


A bit messy at times, but with more than enough stellar highs to compensate for the minor shortcomings, and an amazing set-list.  Cyril, Chris, George, and Victor Penalosa on drums, delivered the set we were all waiting for. It started with Cyril breaking a string during the opening “She Said Yeah” and having to leave the stage to change it. Chris stepped up and filled the void with a beautiful solo Chimes of Freedom. There was a camaraderie between Cyril and Chris that wasn’t evident at Dig It Up – it was genuinely heart-warming to see them joking and exchanging banter. “You Tore Me Down” was perfect, their “Feel A Whole Better” same again. “Yes I Am”, “I Can’t Hide”, “I Want You Bad”, “Don’t You Lie to Me”, “Between the Lines”, “Let It Rock”, “Slow Death”, “Married Woman”, “Tallahassie Lassie", a sublime “First Plane Home” and ultimately, “Shake Some Action”. It was all too much. All going to plan they’ll be playing shows in the UK and Europe mid-year with new songs to be rolled out.


Them Flamin Groovies are back in action! Don’t miss ‘em!

Thanks to Ross for the report and the photos
Posted by Lindsay Hutton at 6:43 PM No comments:
Newer Posts Older Posts Home
Subscribe to: Posts (Atom)