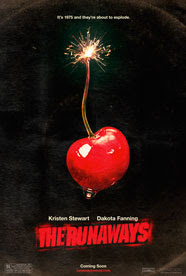 Mr Percival sent me this link to a review of The Runaways movie from Sundance.

I wonder who plays Phast Phreddie in it?
Posted by Lindsay Hutton at 5:29 PM No comments: 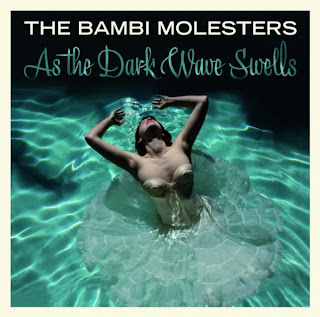 Thought you might like to take a look at the cover art for the mucho anticipated new Bambi Molesters epic...
Posted by Lindsay Hutton at 5:23 PM No comments:

Ever having the feeling you were in over your head with this life business? Not that I actually have a fully-functioning one of course but hopefully you get my drift. The ongoing 5am rise pretty much means that I peg out before “The Daily Show” and I’m getting a little tired of this routine. Haw haw. I just realised that I made a wee funny there. Earlier today I got a message from someone who wanted to know if I wanted to receive an album for review consideration. It was described as sounding like Radionapper and Queen. They also mentioned that travesty that has a singer called Brandon. Even reading about that qualifies as suffering for my art.

The least offensive part of that, to me, is Freddie’s crew because I saw them with Mott The Hoople. And because my buddy Art Fein likes them and The Blasters even opened for them once. However there are things that tend to reverse the general wearing down process.

I’m going to use an Americanism here to state that I am “stoked” at the response to The Legendary Tigerman and Rita Redshoes post from folks out Portugal way. Never in all my time doing this have I had such a fervent support for recognising something as obvious as these two artists make great music both individually and together.

It’s led to a few leads on other stuff from that neck of the woods and I’ll be checking that out in due course. Of course, I imagine that other countries get a little sick of being bombarded sub-standard guff from the UK when they have such high calibre talent themselves. I don’t think that acceptance here makes any difference anymore because we're down in the big ledger as the country that buys into all the TV led/Z factor shit. It possibly does in the US because of the potential money reward but even then you have to wade through your chest height in hype for crap. Just thinking out loud here…

So music fans should take a leaf out of the book of our Portuguese friends. They have a passion and appreciation for their artists that would go a long way if adopted in other territories. It’s always good to get a reaction and especially one as overwhelmingly positive like this.
Posted by Lindsay Hutton at 5:20 PM No comments:

Just announced, HELLO SAFERIDE is to play this seaside bunfight in May. Let's hope there are some other shows across Blighty.

May is shaping up to be a busy month!
Posted by Lindsay Hutton at 5:08 PM No comments: 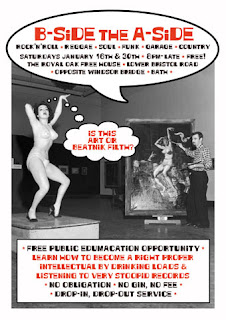 You! Yes, you! Is there anywheres in yer vicinity that be spinning Mose Allison, Amy Allison, Amy Rigby, Will Rigby, The Troggs, Jim Dickinson, Jim Tarbutton & The Memphis Sounds, "The Memphis Train", "The Right Side Of My Mind", "Outta My Mind" and so much other righteous tuneage that youse can barely grokk it and plan your teatime treats simultaneously?

Non? Well, you is wrong! Come quaff, burp, fall over and pick thyself up in a most spiritual manner at the twice monthly B-SIDE THE A-SIDE nite at The Royal Oak, Lower Bristol Road, opposite Windsor Bridge, Bath, Zumerzett!

Saturday January 30th will see BigKegShandy and Steptoe, who has been partneners in turntable crimes for near-as-dammit a quarter century, taking to the wheels of polycarbonate for another FREE vinyl-only celebration of all we holds dear, including tribs to the great Jay Reatard, Mick Green and Bobby Charles, plus some serious Dutch biet action, in celebration of yon recent Outsiders tome...

Make you know it sense! From eight til' late – "the kids bring zucchinis and stay all day", as the Young Fresh Fellows would say...

See you at the bar!