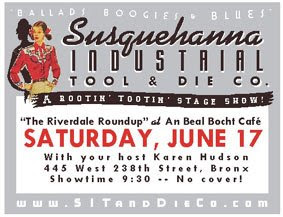 Hello Friend,
Susquehanna Industrial Tool & Die Co. is going uptown this week -- all the way uptown! Indeed, please join us this Saturday in the lovely Riverdale section of the Bronx for the monthly "Riverdale Round-Up" at An Beal Bocht Cafe, an Irish bar that defines the term. (Umm, "Irish bar", that is.) Your "Round-Up" host, Karen Hudson, promises trivia, prizes and song, and we have no reason to believe that Karen would fib. Oh, and there'll be shepherd's pie, to boot! 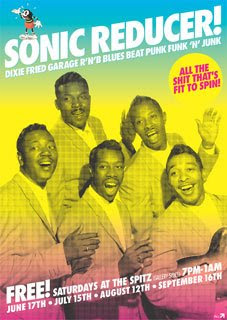 The Darling Downs – How Can I Forget This Heart Of Mine?

Kim Salmon and Ron Peno cast as an antipodean latter day Louvin Brothers? Well, this is about as far away from “Swampland” and “Mirror Blues” as you’re likely to get. Bridging a gap between folk and country with a spare, plaintive air. I think there’s always been an affinity with country music in Australia, in much the same way as there is in Scotland. It’s locked into the dna. It’s only fitting that an Appalachian mood could infect a simple acoustic format such as this and the result is an accomplished feat of beating the Americana subculture at its own game. Kim cast as a different type of backwoods man as he sings about with The Scientists. Maybe. Anyway, this is available outside Oz on The Handsome Family’s Carrot Top imprint. Dark and foreboding but with all hope not quite abandoned. Play after twilight.
Posted by Lindsay Hutton at 10:09 AM No comments:
Newer Posts Older Posts Home
Subscribe to: Posts (Atom)