Welcome to the good folks of Portugal who have been dropping by this neighborhood over the course of the last wee while. Pleased to make your acquaintance!
Posted by Lindsay Hutton at 6:12 PM 4 comments:

There are a lot of good records coming out and after I’m done with this I’m going to get in about the new Pascal opus due on Novoton soon. Despite the ongoing gloom mongering about the “industry”, I think the positive aspect is that perhaps the element of measure isn’t taking into account the fact that ardent fans of the stuff maybe aren’t buying the treadmill crap that has a limited shelf life. Also, many of these artists end up appealing to the thieving types that have forgotten or never knew that maybe the people who make the music maybe need to get paid? That’s the line in the sand. The computer software exists to aid accounting certainly with regard to the gadgets that are aimed at those who are likely to be most likely to consume music.

It has done for a while. It should be easy for record companies, distributors or whoever to provide information to artists, labels and those that they represent. This isn’t the rule but rather the exception. Put yourself in the shoes of the person being shaken down. You wouldn’t like it.

So with ever decreasing outlets in terms of tangible media and an exponential increase in the places where you can be exposed to things you might like and may want to buy. The sheer volume of what you have to process is overwhelming. My position as trying to offer some kind of filter is limited. It’s also a privilege. The fact that people can easily hear what is “reviewed” to ultimately make up their own mind had rendered the hype merchants toothless. Most reviews these days don’t offer an opinion or anything other than to fill up space in a publication or screenspace. Hell, often they aren’t even reviews, just the press release presented as a text stream.

And then there’s all this “Hall of Fame” crap. Is that even good in terms of commerce anymore? Surely not. Recognition is one thing but this has become like everything else. Soon it’ll be the ultimate accolade not to win an award. Or not to feature in the Quoon’s Birthday Honours. Enough with the tinplate and/or glass doorstop shit already.

Where will it all end? Hornswaggled if I know. “Hornswaggled” sounds so much more polite than “fucked” right?

Picking up from Lindsay's post about Dr Feelgood the other day, kids (young and old) in search of similar kicks should do themselves a favour and investigate King Salami & The Cumberland 3. These guys come across as the bastard offspring of the Feelgoods and Barrence Whitfield and the Savages. Hey, they even perform covers of "Mama Take The Hammer" and "Bloody Mary" so you know that the taste factor is not an issue here.

This international band of Stoke Newington habitués, comprising of two Frenchmen, a Jap, and a Welshman, have the greasy r'n'beat nailed down to perfection. Last Sunday night's freebie gig at The Stag's Head in London N1 was the stuff that heaven is be made of. Non-stop r'n'r action, a punchy-as-heck sound, great beer and plenty of good looking women dancing away.

Trust me, it will be just like this when we join Mick Green et al. Should this sound like your kind of deal then look out for hip swinging 45s by King Salami on Dirty Water Records and Soundflat Records. In the meantime, check out their MySpace page for a flavour of what they have to offer. Besides, how can you resist a band that invites you to "Do The Wurst"? 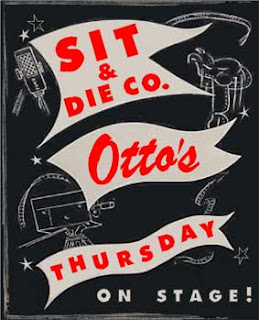