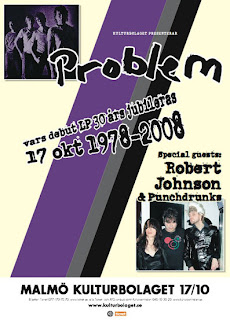 Taste the whup in Malmo, October 17th!!
Problem
Robert Johnson and Punchdrunks
Posted by Lindsay Hutton at 4:33 PM No comments:
Brother Don has just "phoned-in" this review of E & A from last night's SF show...

"i'm just back from that roach ridden dump way across town... it's 3 am and i'm bleary eyed... went all the way to oakland first to see opening nite of brian wilson's latest tour. theater was half-empty and everyone had balcony seats so they "upgraded" us to orchestra so as not to have an empty floor. brian was great great great but you don't want to hear about that so i'll go on...

got to theeee plopside at 11PM just a few seconds into the first song of the wreckless wrigbys which was the beer song. right off you could see they were gonna be way better than last time. much tighter but just as spirited. amy had her gibson j45 and eric had a nice guild hollow body just like the one on the cover of kinks kontroversy. they took turns with her songs and his but this time it really seemed like "someone nailed (them) together" as one of their songs goes. from amy's catalogue there was "till the wheels fall off", "raising the bar", "rasputin", "joey ramone" among others. eric did the great "reconnez cherie" and lots more faves including of course "whole wide world" and "take the k.a.s.h". they harmonized well. he played great bass (an old fender mustang with maple neck). amy played some keyboard.

oh-- they did "you tore me down"!! after which yours truly yelled out "groovies!" cause i know nobody knew the song but me. and eric said, "we're not the flamin groovies...you don't care for them do you? how do you feel about jefferson airlplane?"

they did some stuff off the new album -- the notorious "men in sandals" which eric introduced by complaining (rightly so) how stupid men dress in this country ("why do they dress like they're eleven years old?"). another good one was "here comes my ship" (which apparently would be the 45 if there was one). and they did my fave, "please be nice to her", accompanied by a rhythm ace via laptop. amy played some great leads on her little ol harmony solid body electric. eric peeled off quite a few decent solos. they played for nearly 2 hours and had a line of people waiting to buy the new album.

which i can't wait to hear but my eyes are closing as i write this... chatted with amy a while... great to see her again... she says she's headed your way in november. i wish someone would back them up with bass and drums... they'd be monstrous."
Posted by Lindsay Hutton at 11:57 AM No comments:
Newer Posts Older Posts Home
Subscribe to: Posts (Atom)