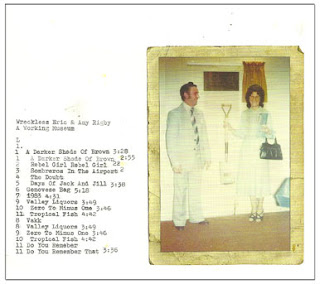 “A Working Museum” is now open to the public. The touring exhibit kicked off in New York last Friday and will wind its way across the highways and byways in due course. It’s a joyously odd affair, a kind of sonic museé mechanique that's made to be listened to as it’s been curated. Eric’s credential as being "an alien of extraordinary ability" is a relative understatement. Who else could possibly come up with a line like “retching to the strains of Kajagoogoo” as he does in “1983”.

Genuine exotica in action, you won’t have heard anything like it. Certain aspects will chime but until now it hasn’t been possible to realise what a Tina Charles session at 304 Holloway Road might have sounded like. Now, during “The Doubt”, you can.

And “Do You Remember That?” is finally captured. Probably the greatest love song of our times with that unbeatable "British Rock Beat" intact. The inclusion of a sweary will likely mean that you won’t be hearing it on the radio anytime soon but maybe they’d consider a limited circulation of a version that changes the “u” to an “e”? Or maybe not. Some of you pitched in on the Kickstarter deal so perhaps you’ve experienced your first toddle through the portals? If you didn’t, and you can’t wait until the charabang arrives somewhere near you then you can get a copy direct from the dynamic duo themselves by clicking here.