Pittsburgh ought to take better care of their own, Wreckless Eric and Amy Rigby are at Club Cafe this Tuesday, July 7 at 7 PM. 7/7 @ 7 Got that?

Now spread the word if you're around and about there and if you see the alleged promoter, give that person a good hard foot up the arse.

If you're on east coast USA then check if they're heading to a joint near you!
Posted by Lindsay Hutton at 8:45 PM No comments:
Peter Holmstedt runs Hemifrån, a bolthole for quality pop bordering on country, an amazing portal where he flys the flag for plain old quality music irrespective of pigeonhole. A kindred spirit for sure so let's make a start on some of those. 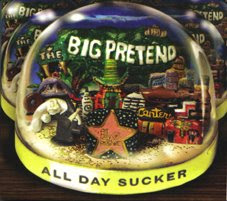 Releases with what I consider to be terrible packaging sometimes prevent me from caring what might be inside. This is a bad habit because you can’t judge a commodity by how it’s dressed right? Take All Day Sucker (apparently a Stevie Wonder song title?) for instance. Not a good name to my mind plus the lyric font is miniscule. I simply can’t read it. However this album, “The Big Pretend” is like Cheap Trick via The Raspberries taking in a wee Rundgren era-Hall And Oates marinade. Very impressive outright AM popping rock. Like 10CC maybe if they’d come from West Coast USA instead of Blighty. “Nobody Somewhere” and “Land Of Canyons” are really good songs. At first I thought the band name was The Big Pretend and have to admit that when I saw "Maroon 5" mentioned on their page I was ready for the worst. 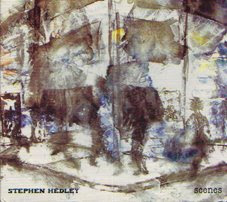 Stephen Hedley is a Canadian that reminds me of Roddy Frame and the title track of his album “Scenes” is very Aztec Camera. If that’s your bag then you’ll most likely enjoy this but beware of the vocoder-y effect on “Downtown”. Not to be confused with The Skele-song of the same name. 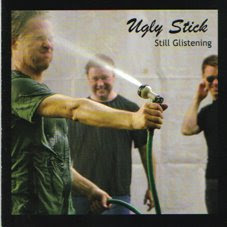 Pick of this litter is “Still Glistening” by Ugly Stick. The packaging on this one is unassuming to the point of unattractive. This Columbus, Ohio quartet delivers the goods in sound terms though, good and dirty rock sitting somewhere between Lucero and Dan Baird, maybe a little Replacements and Hoodoo Gurus here and there too. “Little Lynn” kicks things off with a frantic hoedown and the Stick are wielding an almighty racket that is undoubtedly several degrees more deadly in the heat of a club. “Soul Satisfaction” is possibly my favourite cut, “What’s your favourite kind of monkey?”, now that’s what I consider a lyric. Fred Willard and Sondra “Kima” Sohn are pictured with members of the band at their myspace. 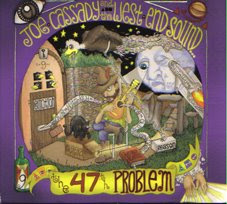 Joe Cassady and the West End Sound are toting a lavish digipack entitled “The 47th Problem”. From NY, these guys are actually headed for some festival action in the North of Scotland in August including Belladrum. This is superior roots rock or if you prefer, Americana. It certainly and undeniably is american music that’s for sure but covers a multitude of bases within that rather limited pigeonhole. Judging by the little research that I’ve done on the back of listening to this would suggest that this will be one combo worth catching. Wish they were stopping by the lowlands, “G3 Blues” is surely an ode to the Glasgow postcode? And how about those atmospherics on “Big Wave”? I feel like I heard this song before, not because it sounds like something else, but because it feels comfortable. It’s a little like Elliot Murphy maybe and it got me thinking that this guy could cut a great version of “Last of The Rock Stars”.

Posted by Lindsay Hutton at 2:59 PM No comments: