Motivation. Now there's a word. Ambition is another and your reporter here is sadly lacking with regard to either. I have no pressing urge to take over the world or indeed anything. The simple art of peedling on has taken on something of a downward precipitation. A tailspin that has me, frankly, wondering if it is in fact possible to avert an almighty splat. I listened to a couple of things today but nothing of any consequence and a couple just plain stank. There are cool things lying around here and stuff I oughtta be filling you folks in on but let's just say that i've come down with a bout of "writer's (breeze)block". Not that I ever considered myself a writer in the first place but you probably get my drift? One pressing matter around my noggin is to figure out about taking some time away from the stalag. Anyhoo, I hope that the lack of activity around these parts won't put you off dropping by again. I'm listening to someone on internet radio banging on about Mercury Music prize nominees. What meaningless pish that is in the grand scheme of things. However, let's take things out on a positive keel - check out this Radio Stars website and don't forget Jeroen's Chiswick sideproject. The "auld yins" are the best right enough...
Posted by Lindsay Hutton at 8:20 PM No comments: 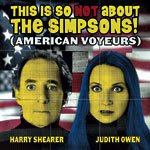 No sign of Mitch and Mickey unfortunately but Derek Smalls appears in his alter ego of Harry Shearer with his wife Judith Owen at the Assembly Rooms in Edinburgh during much of August.

Also, tonight there's a BMX Bandits/Evie Sands session on Radio Clyde which you can stream live but I don't think there's a "Listen Again" function. It's on Billy Sloan's show which starts at 7pm and runs until 10pm.