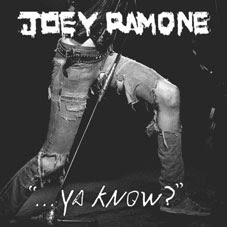 A new Joey Ramone album, 11 years after the big fella left the building, is finally coming out soon and of course the over-riding plus in all this is we get to hear his voice again. One song, “Party Line” is, in my opinion, up there with anything he ever did but how is the rest of it. Is it like the time Natalie and Nat King Cole got together or the colourisation of a classic black and white movie?

Actually it’s pretty good. Having been assembled from demos and rebuilt using friends/fans to lay down the firepower, “... ya know?” is a “relative” success being that Joe’s brother Mickey Leigh has coordinated it. It sounds big and powerful and Joe is singing great. As I understand it, it's culled from across quite some stretch of time. Haven’t clocked a finished copy so I don’t know if such information is annotated. I sure hope that it is.

The road to this has been twisty. It would have been nice if there could have been a “documentary” version that presented the songs as they were with what they became. Maybe a film to go with it but this ain’t the case so we should probably just savour the fact that it exists in any form. One big question that bugs me however and it’s this...

Would Joey have wanted this material out? I’m thinking perhaps not. But it’s the closest we’ll ever be to him being around and – in essence - anything that makes the memories of the guy burn has to be a good thing.

I can just about listen to “Party Line” now without feeling like I have something in my eye. The first time it outright made me cry. “Waiting For That Railroad” is practically roots rock of Del Lords variety. The Percy Faith(ful) rendition of “Merry Christmas” is cool. Wish they’d slapped “Duke of Earl” on here too – did you ever hear that? Blasting off with Joe’s voice soaked in funky cold medina on “Rock’n’Roll Is The Answer” would perhaps have gotten to radio if that medium still existed. Joey's predeliction for Bolan really comes across here and there.

He should have owned the airwaves when he was alive but unfortunately we are where we fucking are - missing the fact that the greatest singer of my generation ain’t still around making music and being a force for good. The star-studded cast brought together to nail this presumably did so out of a common goal to celebrate the subject. After all, Joey and his group made it possible for many of them to be where they are. The rock pantheon, like life, is an ill-divided platform. Sitting on a mushroom out in the woods throwing some WHO shapes seems like a fairly attractive proposition right about now.

So here we have Little Stevie Van Zandt playing train conductor (those are his dulcet tones at the end of “New York City” right?) and “I Couldn’t Sleep” seems to radiate a Jukebox Babe kind of mutant rockabilly. Maybe this should have been the single because it positively crackles. Kinda got chills when I heard “Wonderful World” blasting out as the music bed of a Thomas Cook ad in The Hippodrome recently.

The Ramones brand is ubiquitous but it saddens me that only Tommy remains to see it but CJ and Ritchie may yet enjoy some fruit from their association. I don’t count Mark and as I understand it, he’s on some of this scratching out further mileage.

With only Line Dahlmann coming close to delivering a more devastating woah-oh-oh these days, it’s a fine notion to be able to enjoy my old friend’s voice again. It was suggested to me lately that Mickey might have re-recorded some of the vocals but that’s a bridge too far for me to even contemplate. Such a conspiracy theory is surely up there with the notion that the twin towers was an inside job. Isn’t it? I often wonder what Joey would have thought about what happened down there and how it affected his “town”.

Anyway hear it for yourselves here, I’m curious as to what YOU think.
Posted by Lindsay Hutton at 12:34 PM 2 comments:
Newer Posts Older Posts Home
Subscribe to: Posts (Atom)