In my capacity as agent for the Madrid Tourist Authority, I think the next stage is a one way ticket.
Hitting the city at full pelt on Friday night may have been a tactical mistake but that's the way it all shaped up. Maybe just taking the foot off the gas a tad may have set us up better for Saturday but when you’re in the eye of a storm like this, the last thing you’re thinking about is moderation. The locations that we found ourselves in were as follows Casa Parrondo, Templo Del Gato, Weirdo!, Wharf 73 and Wurlitzer. All 150% recommended with the NBT seal of approval if you’re in town. 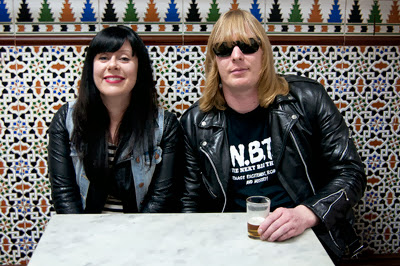 Line and Andre at the excellent La Alegría (Happiness)
by Blanca Velasco Navarro.
After that a wee siesta was in order before the show and all the fun stuff like sound check. The city was teeming with people and an attempt to partake of an Asturian joint was thwarted. Despite the best efforts of Corporal Laura to instill some discipline in the hapless waiter that was fighting a pretty valiant losing battle. She had an excellent Plan B that involved regular haunt Ovni and that provided the necessary croqueta action for the boozing to follow. From there to Wurli, just in time for Los Brackets – a fun punk combo from Valencia that have the Ramones end of Screeching Weaselness down pat. They just rattle it out in machine gun fashion, no pissing about. Bang. Bang. Bang. You don’t even notice the comedy Proclaimers type glasses they don when onstage. I’m a sucker for this kind of thing. Particularly when it’s rattled out this well. They and their crew were very cool kids. Incidentally, in combing the net, I discovered that Brackets are teeth braces in Spain.

Potential wardrobe malfunction thwarted, The D’s took the stage and proceeded to wipe the floor with us. They just get better and better and even although I’m biased, this could well have been their best show in this hallowed hostelry yet. I hadn’t seen them do “Crush On You” before into the bargain. The hang out there afterwards was of the usual high standards and I thank Helena, Alvaro, Jorge and birthday boy Benito for throwing the bash that would colour much of the next day...

The band left horrendously early and I spent much of the day in a semi-coma until I met up with Sir Marco of Ghost Highway Industries. A wee bit later Inigo and I had a couple of beers and further croquetas but that was the extent of the festivities. As I wandered toward the hostal, my inner demons were battling with a modicum of sense. I wanted to go to Wharf to see Alvaro, and also to make a final 2013 pit stop at Wurlitzer but bottled it. Somehow I was back in my digs just a little after midnight. This was founded upon having an early breakfast and not wanting to go to the airport feeling any more miserable than I would at having to leave. Compounded by finding out that Jonathan and co would be in town just hours after I’d gone.

Them is the breaks though and one should be thankful for the blessing that is taking part in such malarkey. Upcoming shows by those Flamin Groovies and Redd Kross are tempting but I guess it’ll be a bit before I’m back. Three times this year is a pretty sound innings and I’d like to thank everyone that makes that possible spiritually and every which way. They know who they are.