I heard about the Easter bunny...

It feels like ages since the last time I posted some kinda general update on the goin'-ons here at N.B.T.'s Dutch H.Q. So where to begin?

One thing that has been keepin' me occupied is Jeff Chang's Can't Stop Won't Stop. Subtitled A History Of The Hip-Hop Generation, this is one of the best rock reads I've come across in ages. Not just a musical history, but also a very clear look at the social/political backgrounds of the genre. And as much as I dig 80s rap, it certainly didn't warm me to "gangsta" morons, or that hideous "urban" crap that is everywhere these days. But as a solid read this is up there with England's Dreaming or Days In The Life. While reading this, the recent Big Apple Rappin' comp on Soul Jazz served as fine background music. Compiled and annotated by Ugly Things contributor Johan Kugelberg (who does a great job on the liners), this is a fab selection of (very) early rap that was mostly new to me. From the same label comes a fine collection of mixes by Tom Moulton, the guy who invented the 12" disco mix. Not sure if this would go down well with your average N.B.T. reader, but what the hey... Dutch readers might wanna check a new book on record collectors by Robert Haagsma entitled Vinylfanaten. The guy's a metalhead, so I gotta deduct some points for includin' not one, but four collectors of the genre. (For the life of me I can't understand the attraction of Iron Maidon pictures discs, or the constant one-upmanship of "I've-been-a-fan-since-their-first-demo"-like tales). No fans of punk, reggae, soul or Americana (blues, country etc.) either. But at least some of the good guys (Michel Terstegen, Johan Visser, Marthy Coumans, Jules Deelder and Johan Derksen) are featured as well. And it's always fun reading how others deal with these, er, "problems"...And yeah, there's more, plenty more, but it's way past midnight and I need some sleep before tomorrow anounces itself by way of our one-tone-only alarm clock (Loud!)...
Posted by Jeroen Vedder at 10:57 PM 1 comment:
You on holiday today? Revved up to make that visit to the DIY superstore or some such retail facility?? I'm not. On holiday that is. Don't want to burn a day's annual leave. That's not to say that I want to attend the daily drudge but one of the only pleasures left is to be off when the other drones are in attendance.

The urge not to go in this am is strong but I'm not folding. I'd only regret it and be twice as despondent later. That's the quandry right there. Recent conditioning suggests that I'm lucky to have a job. That so many people don't. Life is just a big bowl of something... gruel mostly.

But anyway, the racket that is Easter will soon be over and Mayday will loom into view. That's one "holiday" I will partake of because it describes my downward spiral perfectly. So, if you are off today. Make a pact with yourself. Stay home and play some records and generally goof off. Don't go spending anything that'll make the pundits seem like they know your every habit. Even though they alarmingly do. Time I wasn't here...
Posted by Lindsay Hutton at 6:44 AM No comments: 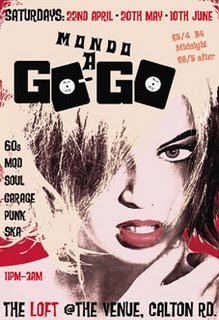 "Tho we've been spinning A good bit of SKA ourselves. This Saturday, 22nd April, we're Bringing in the experts. None other than BAZ & TAM from DR NO's SKA CLUB - Expect the best Jamaica and the London 60's Mod Reggae scene had to offer.

Tall Paul Robinson & Angus will also be there to spin 60s, Garage, Psych, Beat and Soul. All happenin' at THE LOFT, @ The Venue, Calton Road, Edinburgh. 11pm-3am. £6/5."
Posted by Lindsay Hutton at 6:41 AM No comments:
Newer Posts Older Posts Home
Subscribe to: Posts (Atom)