The Nomads website is switching to a new URL so visit them and bookmark this new one. They are kings of rock and roll no matter how much they protest. Talking of which, Little Steven's "Coolest Song Of The Week" for w/e December 31st 2006 "Ain't No King Of Rock and Roll" will be available on vinyl courtesy of Devils Jukebox. A pink vinyl split 45 with Brighton's Sweet Zeros. Limited to 666 copies so get yer order in...

Sticking with Sweden, SOS kicked off this years antics with a show at Nice'n'Sleazy. It seems to have been refurbished since I was last there and was surprised not to be sticking to the floor. The name has connotations with The Stranglers for me and that's not good. Anyway it was a pleasant shindig with a decent turnout for Vapnet (pronounced Wapnet). They make a sound not unlike Bob Hund swapping blows with OMD. After a couple of bursts of a black metal direction courtesy of the PA, the evening settled down and the band laid their morricone-mariachi pop stylings upon us. Per-Olof and Jesper from the HS brass action combo (as well as Autisterna) were there and the singer in Vapnet, Martin (Hanberg) also duets with Annika on the Säkert album. Like that, all of the songs were in Swedish but it didn't matter a jot. Apparently the last song in the set was about all the people they hate but not done with a hateful sound. Hopefully they'll come back and play again. For longer. With a PA that hasn't been handled by some Norwegian church burners. Openers, Skeleton Bob weren't bad either. They did a cheeky wee version of "Mama Mia". Might have played a wee bit too long but when they get around to pacing their set then who knows, they could leave people wanting more.
I'm having trouble with this bloody thing tonight, think i've caught something on myspace that you can't buy cream to rub on.
Posted by Lindsay Hutton at 6:31 PM No comments: 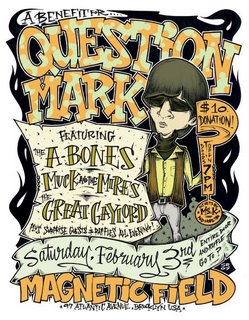