Paris-Paris is the name of the club and Paris is ... Paris.

Chris Wilson & his Groovin’ Flames were in town for two private shows and was told by a member of the group that PP was the better place, so I asked Marijo, Chris’ ex wife, to put my name on the guest list. She kindly put “Patrick + 1”.

The Flamin’ Groovies are family favourites at home. My wife and I had the chance to see them in 1976 and 1978, but my son Jonathan didn’t – so he was the “+ 1”. I also saw a group called “Flamin’ Groovies” in 1990 : Cyril Jordan and George Alexander were great but their FM rock singer didn’t fit.

Cool venue, reminded me of the Magnetic Field in New York : good music before the show, giant screen playing an old movie ... The audience was composed mainly of rock critics and members of groups – probably including (for the older ones) the whole bunch of people who bought the 50 copies of “the Groovies’ Still shakin’”sold in France at the time (at the time the album was reported to have been bought by rock critics only : all the reviews were positive but the public didn’t buy it).

With your eyes closed or only focused on the still groovin’, enthusiastic and mesmerising Chris Wilson, you could imagine yourself back in the 70’s – not that “it was better before” kinda crap, just that it recalled the emotion of magic moments stuck in your mind (like when I saw the Stooges 2 years ago, I know that Mr. Martin Percival exactly knows what I mean). The set was composed of some highlights of the Sire 1976-79 trilogy “Shake Some Action / Now / Jumpin’ In The Night” and some older favourites : “Slow Death”, “Let Me Rock”, “Teenage Head” and “When I Heard Your Name”. Nothing more to say...

The Groovin’ Flames are currently touring France and will be back in Paris on October 6. They’re also scheduled to perform on Friday, September 22 at the Popxiriapop Festival in Carballo, Spain and Roy Loney & the Longshots will also be performing the day after on Saturday, September 23, 2006 at the festival. Could a special event be in the works?? 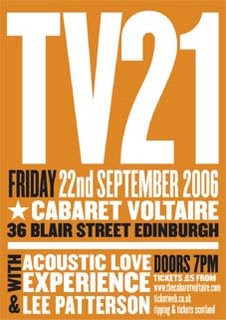