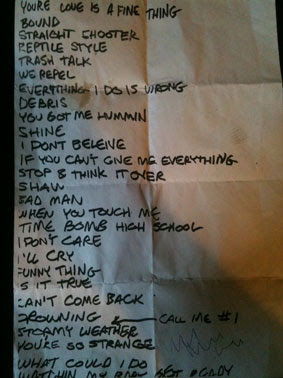 This is blog post 6000. Is that significant? Probably not but it seems like a reasonably round number. It was also my parent’s phone number for a long time until those 4 digits had 48 stuck in front of them. Anyway, rather than run off at the keyboard with regard to exactly why there’s a fair chance that I might go postal at any given moment, let’s hear how Mr Duff fared out in Oslo the other evening...

On Sunday night I saw the Reigning Sound play Café Mono in Oslo and it’s been a few days now but I’m still almost speechless when I think about it. This band is truly the hands down, flat out, no contest, greatest rock’n’roll band on the planet.

We flew out from Edinburgh on Sunday morning with our passports in our pockets and no tickets for a sold-out show. I had a promise from Greg that he could ‘probably’ get us in but you can understand the slight trepidation. A few hours after checking in to the hotel however, we stroll out into the lobby and walk straight into Greg Cartwright hidden behind Raybans, fumbling with the lift controls. It was all a little unexpected and I think I actually tripped over my own feet while trying to look casual. In any case, he was sweet and gracious and seemed genuinely excited by the present of a Poets fan club CD/DVD set that I had brought him. We chatted briefly and he agreed to put us on the guest list. Whew!!

Openers - Kosmic Boogie Tribe are way better than their PR blurb makes them sound. I feared the worst but their Nashville Pussy by way of the Nomads rawk was good enough fun and they clearly had local support.

The Reigning Sound took the stage and with little or no fuss belted into “Your Love Is A Fine Thing”. It’s been a long time since I last saw them and I had wondered if they’d sweetened up the live sound as they’ve done on record. No, they have not. They powered through more songs than I could count with not a second wasted on each. A lesser band would be so proud of any one of these that they’d draw them out forever but not these guys. I don’t know if any of the songs broke the 2 minute mark. I know I went to the bar (for a couple of those 9 quid beers Norway is so famous for) and missed two songs in the brief time that task took. At some points in the show I found myself thinking, how can they play ANOTHER song so sweet and tender and savage and still sound fresh? Then they did.

The crowd was rapt from beginning to end, every single person in the room being fully aware that they were in the presence of greatness. Everyone being obviously very familiar with the full Cartwright catalogue. They played almost everything you could want, although frequent calls for The Compulsive Gamblers tune “I Want To Be Your Happiness” were ignored.

The band left the stage toward the end, leaving Greg to croon through two solo numbers before returning to blast through two more tunes. And that folks, was all. I’ve only ever saw James Brown receive a longer encore demand. I’m not sure if the band were tired, out of tunes or had just ran over the live music license time but no matter, it could not have been any better than the show we had seen.

I asked them to play Glasgow on this tour, but there wasn’t the space in the schedule. Next time, hopefully Scotland will receive the blessing of the Reigning Sound. Who’s all up for that?