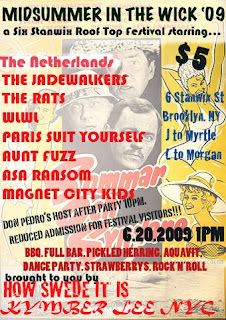 Posted by Lindsay Hutton at 5:34 PM No comments:

June is rattling in at a fair old rate. No what day is it misfires on the noggin front this week and today is most definitely Friday. First day of my EIFF action this year is tomorrow, this is my 30th year of actively attending this event. There was one in recent memory when I boycotted it because the artistic director was a putz but other than that, despite the odd kvetch here and there it is a cool thing. An economic constriction has meant that I can't see the number of films would normally be seen but that said, I'll still see 10 over the course of the week. Depending on the Best of the Fest list, that number could rise next weekend. 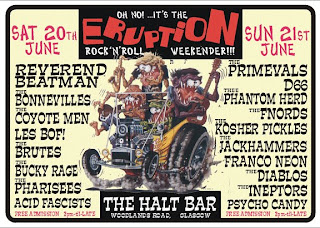 If you’re in Edinburgh tonight, the Coyotemen will musically marmalise ya at Henry’s Cellar bar between the hours of 11pm and 3am. The Brutes will also on hand to rough you up. Both acts will be appearing at the ERUPTIONFEST that is taking place at The Halt Bar in Glasgow this weekend. Unfortunately, I’ll be on the other coast. Actually I’m off on Monday too because I have to burn an annual leave day because of the annual bunker boiler check. A necessary evil unfortunately. Blog activity will be erratic over the next couple of days and the weather is forecast to suck. Same ol’ song and dance really...