The rain last night was biblical in its torrentialness. I'm not even sure that's a word but it was bloody pissing down. Hard. Thankfully, it passed and I came out relatively unscathed. Compared to the poor blighters that fell foul of the pathetic to no drainage and rivers bursting their banks.

Jumping in the car this morning though, I landed in about a half inch of water on the floor of the driver's side. Despite a complete checkover to try and find out what happened I can only assume that it was some kind of capillary action where the water came down the back of the fucking dashboard. Short of turning a hose on the blighter to reinact said deluge, I'm not sure of what to do about it. Other than check with the dealership.

So I've bailed it out like you would a dinghy and it's drying in between showers. Pain in the arse but all tolled, it could be worse. As if the chores that I had alloted myself for this sabbath weren't enough, dealing with this kind of nonsense really aggravates me. It took three plays of "Anna" to come back to just left of centre... 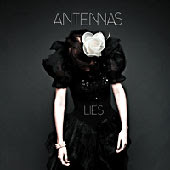 Anyway, the rain is on againso let's steer off the outright rock’n’roll highway into what could loosely be considered dance straße. I can’t figure out whether the vocals on “Lies” by Antennas are male or female, there are no girls in the “band” but it could be a guest. Anyway, they’re Alison Moyet circa Yazoo-like and there’s a Chic aspect to the groove. Maybe it’s neither but I see a 12” Atlantic disco single spinning while it plays out. There are four “mixes” and all of them are great. The third is more metal while #4 is a Kraftwerkian/Moroderesque workout. This is on the great Novoton imprint so you know you’re dealing with quality gear. 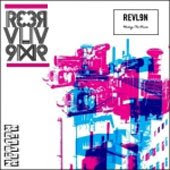 Keeping those BPM pumping, REVL9N really burn down the house. The “Waiting For Desire (9 Nuances of Skacid)” EP on Törncrantz Rock’n’Roll is an electro-escapade of no uncertain measures. Part of the Playboy Marse estate, this is a highly sophisticated bump and grindathon with 11 shades of the track treated by various dignitaries including Sci-Fi SKANE. There’s no point in dribbling on about it when you can hear this shindig for yourself. I know some of you are of a myopic disposition but in my opinion, this rocks harder than much of what I’ve come across in a “trad” vein of late. It’s been out for a while but there’s no shelf life involved with stuff of this magnitude. Plus, some of the members are now Punchdrunks. More about that when there's something to tell.

So let's get back to more regular territory now before I park up for the day. Seeing Rob's album lying here, it has occurred to me that I need to get to grips with The Scoundrelles "Atomic Batteries to Power" on Bang. My memory has been failing me of late. A further reminder of the onset of senility, basted in stupidity. However, enough of my shortcomings... 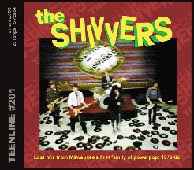 I have to put my hand up. I’d never heard of The Shivvers before hearing the Hello Saferide version of “Teenline”. The A-side of the group’s only single. That sparked an investigation that unearthed the Hyped by Death compilation that collects the band’s entire recorded works along with some video clips here. For a combo with this many hooks to have only ever released one 45 is a mystery. Maybe they were operating away from the pulsebeat of the major metropolitan hotspots but shouldn’t that have been a plus? But what’s done is well, you know…

By rights they’d have had many hits which would have meant that they’d be touring again now ala Blondie or whoever. This was power pop par excellence, like The Rubinoos with cool girl vocals that skewed the outcome a little. Some of the cuts here remind me lot of Blue Angel, prior to Cyndi Lauper going solo. The songs that have a male lead vocal are very like The Raspberries. All of it has a fantastic Who-style dynamic that separates it from the often punkoid/”new wave” stylings of the time.

How I missed the Bomp and New York Rocker reviews at the time is beyond me and I’ll have to chalk this up to be one that got away until now. Based in Milwaukee, famed for beer and being the fictional home of Laverne and Shirley, The Shivvers according to the liner notes didn’t really travel beyond a small radius of Wisconsin. How the A&R fraternity of the time never tried to lasso them at the time is a mystery. Or maybe they did? Anyway, it’s unthinkable to consider that a band of this quality didn’t have an album out. The band had support in high places, Iggy and Eric Carmen both professed their allegiance but still nada. Annika Norlin told me that she discovered “Teenline” on a compilation that her then boyfriend had. Her version is on the fine Groover Recordings comp, “Jeans and Cover”. Had that connection never been made then I may still have never heard this incredible band. “It Hurts Too Much” is something that Ellen Foley could have done with at the time rather than pissing about with that Clash bollocks. Their version of Shaun Cassidy’s “Hey Deanie” has that Dictators “Stay with Me” harmonic glow about it. I’ve no idea if these peeps were down with NY’s finest or not but the musical bond is here for all to behold.

I unreservedly recommend that you get your mitts on this. The Shivvers – Lost Hits from Milwaukee’s first family of Powerpop; 1979 – 82. HTD have e-mail operators standing by to deal with your requests. If you’re lucky enough to have a copy of the single then I’m very jealous. I just ordered Jill Kossoris’ solo album “Invisible” from Cd baby so expect the lowdown on that in due course.

And in a final bitchslap, a quick check of myspace just banjaxed my pc so I'm not sure what was lost as the last blogger "draftsave" seems not to have retained any of the links. I'm gonna re-establish those and get the hell outta dodge for today.
Posted by Lindsay Hutton at 2:27 PM No comments:
Newer Posts Older Posts Home
Subscribe to: Posts (Atom)