The MC5 are playing the Paradiso in Amsterdam on December 5...
Posted by Jeroen Vedder at 11:17 PM 6 comments:
Lust For Laughs; Iggy & the Stooges' concert rider...
Posted by Jeroen Vedder at 10:48 PM No comments:
Well, much as i'd like to be seeing The Come Ons take the stage at midnight tonight at Barfly in Glasgow, tis not to be. A seems to be my fate at the minute, nothing goes quite according to plan. I use "quite" in a lame attempt at irony... anyway, it'll mean that maybe some of the crap I have to do around here might be taken care of. However, as a master of procrastination that may manifest itself in watching a couple more episodes of Brotherhood (as sent to me by HT).

Murray has checked in with this info...

"Live action at the Tunnels in Aberdeen this Saturday (7th) in a tag team wrassling frenzy - Edinburghs Shock and Awe & Paul Research take on Aberdeens The Needles & AKA the Fox in a 4 bout thrills and spills action packed stramash, doors open 8 first band on at 9, dancing till the early hours and all for only 4 quid, thats just a pound an act - who could resist! nevermind youtube - google video is the place to be - heres the rockers gig in full if you've got 28 minutes to waste on 13 songs."

Whilst we're on the subject of "wrassling"... 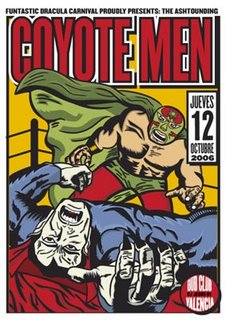 "LOS FABULOUS COYOTEMEN HEAD ON YONDER TO ESPANIA FOR TWO BIG SHOWS THIS MONTH... 1ST ON THE MAT IS A MASK VERSUS HAIR MATCH 'TWEEN THE COYOTES 'N' THAT SWEDISH/SWINGIN' LONDON TAGTEAM THEE EXCITERS WITH THE CARD TOPPED UP BY SPANISH MONKEY MEN LOS SIMIOS AT THE GRUTTA 77 CLUB IN MADRID ALL THE ACTION TAKES PLACE ON WEDNESDAY("HEY BUDDY EVERY NIGHTS WEDNESDAY NIGHT WHEN THE COYOTEMEN ARE IN TOWN!") 11TH OCT..THEN IT'S OFF DOWN THE COAST TO VALENCIA WHERE THE MASKED MASTERS OF MUCK PLAY THE OPENIN' NIGHT OF THE FUNTASTIC DRACULA#2 FEST 12TH OCT! CHECK 'EM OUT AT THE DUB CLUB, THEN HANG AROUND FOR TWO DAYS OF SWINGIN' SOUNDS ON THE SANDS!"

And if you're down in London yonder, Phobics action...

Tonight (Friday 6th) we are on stage at the Venue Basement Bar in Clifton Rise, New Cross. The night kicks off at 9pm and goes on til 3am and we hit the stage at 11:30pm ish

Come early and stay late for a night of Stooges inspired punk and roll from The Moon, The Uptown Decadence Unit, The Penny Reds and The Fuzz Pilots.

WHERE IS THE GROSVENOR & HOW DO I GET TO IT?Cyber geeks: go here.
The Grosvenor pub is on Sidney Road, just 1 block off of Stockwell Road (the A203). Sidney Road becomes Robsart Street and runs East-West between Stockwell Rd and Brixton Road (North of Central Brixton half-way to Kennington Park & Oval.) . Stockwell Tube: Go to Stockwell by tube and then walk South (walk straight out of the tube station's only exit and directly across the street... towards the Swan pub Once across the street keep heading down this road straight ahead (it's Stockwell Rd) and after a few blocks cross the street. There will be a 4-way intersection after a few shops (there's a pub being renovated on the corner that used to be called "the Plug" and you need to go East (left) onto Sidney Rd.
Brixton tube: Walk out of the only exit for Brixton tube. Take a RIGHT and walk past Sainsburies Go a few blocks in this general direction (north), under the bridge, past the Beehive & a few cashmachines & take the LEFT at Bernardos charity shop (towards the BRIXTON ACADEMY). Follow this Road around past the Stockwell Skate Park a few blocks up and take a RIGHT after the first estate block onto Sidney Road. You're there! "

I think that's about it for this bulletin. If I forgot anything then I wouldn't be surprised...