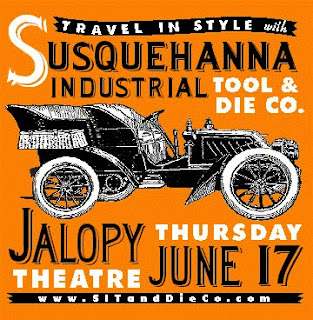 Susquehanna Industrial Tool & Die Co. takes to the borough of Brooklyn this week with a pair of shows sure to suit most any taste -- be it at Red Hook's genteel Jalopy or at downtown's divey Hank's!

THURSDAY, JUNE 17th / JALOPY THEATRE /315 Columbia Street (between Hamilton and Woodhull) in Brooklyn, USA /One hefty horseless set at 10:30, preceded by the twangy Wicked Messengers at 9:00!

SATURDAY, JUNE 19th / HANK'S SALOON / 46 Third Avenue (at the corner of Atlantic Avenue) in Brooklyn /It's "Cemetery & Western Night III", with one slighty gothic SIT & Die Co. set at 10:00 sharp, followed by Ninth House at 11:00 and Shattered NYC at midnight -- and no cover!

Yours across the East River,

Something of a lost night yesterday as I finally recognised that maybe I need to address the matter of this cold that’s plagued me since I got back from Barcelona. Ate, went for what I intended to be a short nap and didn’t surface until much later. Even then I was like a half-shut knife. So I propped myself up in front of the TV for a short while – not entirely aware of anything approaching being compus mentis. Nothing new there, I hear from the back of the class.

The intention of heading into Glasgow tonight to catch Iain Shaw has also gone by the wayside. Got a busy couple of weeks coming up and need to be firing on most –if not all –cylinders and it be patently obvious that I’m not.

I won’t go near a doctors surgery unless it’s absolutely necessary . This compounds the annoyance that it’s never possible to get an appointment when you need one. I have to call them at 8am tomorrow morning whereupon I’m telling you now, it’ll ring off the hook. If I wasn’t so conscientious I’d bunk off work and go down there but even then, it’s pot luck. I’m sure there are appointment touts operating. So if I peg it meantime you’ll know who to thank/blame (delete as applicable).

Seems as though farcebook has dropped a couple dozen blog posts on my unsuspecting “friends” in the past few hours. I have absolutely no scoob as to how that thing operates and had noticed that the blog synch didn’t seem to be working. The random nature of the status updates alone are enough to drive me barmy and I envy those who can stay away from it. Twitter is something I have absolutely no trouble in staying away from to the extent that I’m finally removing the link to it from here. And adding the EIFF button.

Ideally the relentless nose-blowing and coughing. If it was a game of charades, I’d be doing the title of a Screeching Weasel album.
Posted by Lindsay Hutton at 6:06 PM No comments:
Newer Posts Older Posts Home
Subscribe to: Posts (Atom)