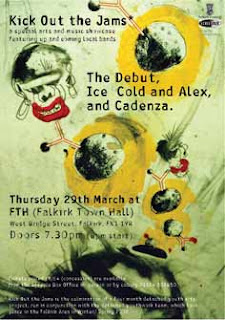 We live in peculiar times. The expression"Kick Out The Jams" has been absorbed into popular culture. I wonder how many people who are involved with this thing have actually even heard of the MC5 let alone "kicked 'em out" to the strains of their almighty roar. But anyways, this is a local thing and I think an interesting example of how kids are returning to what was pigeon-holed "classic rock". ie, made before last week. It's like punk never happened. If you look at their myspace listings there are a lot of old dinosaurs in there rubbing shoulders with bands that have made careers out of aping said combos. Here's the info...

"The arts in all its forms will be celebrated at special gig and youth arts showcase event Kick Out The Jams on Thursday 29th March 2007 at FTH (Falkirk Town Hall). The exciting event will feature promising young bands, The Debut, Ice Cold and Alex and Cadenza.

The gig and arts showcase event is taking place as a fitting close to the Detached Youth Arts Project, which was run in partnership with the Detached Youth Work Project. For the project, which took an innovative approach to engaging young people with the arts, Falkirk Council invited artists from the fields of music, visual art, film and dance to create artworks. These artworks were informed by the experiences of young people who, for the most part, spend much of their time on the streets in the area.

To fully grasp the young people’s experiences, the artists spent a number of weeks on the streets of Bonnybridge, Falkirk and Stenhousemuir with the Falkirk Council Detached Youth team and then set about harnessing their experiences into their work. Cellist Alan Barr gathered random numbers from the young people he met as a way to compose music while artist Jennifer Caine helped them grasp the basics of visual art.

Footage from the Being Detached DVD, shot by film-maker Joanne Caskey as part of the project, will be screened at the event. The DVD, filmed around Bo’ness, Falkirk and Grangemouth, features interviews with the artists, those working behind the scenes and captures exciting dance, skateboarding and junk drumming shots. Other elements of the project will also be shown including stills of the artwork created by Jennifer Caine, the energetic dance on film routine, choreographed by Kirsty Wallace and dramatic music composed by Alan Barr and Jason Taylor.

Paul Eames, Principal Officer (Arts) at Falkirk Council, said: “The event will be a great conclusion to the project. The work that was produced was very much a collaboration between the young people and the artists and we are pleased to have the opportunity to showcase it together with a great line up of promising, musical talent from the area”.

Alastair Ramsay, Principal Officer, Detached Youth Work Project at Falkirk Council, also commented: "The Detached Youth Arts Project has proven to have been an excellent exercise facilitating access to young people on the streets for the arts workers and we hope that it can be repeated in the future."

Doors open at 7.30pm. First band onstage at 8pm. Tickets for the event are priced £6/£4 concession and are available in advance by calling the Steeple Box Office on 01324 – 506850. Tickets will also be available on the door. "

This all reminds me of a dvd project I received from my friend Žiga from Llubljana Rock City recently. Džumbus explores some of the same terrain.

"Detached Youth" sounds like a lost band from 1977 but now it's a local government project. Life continues to pull faces behind the back of art. As it was in Gran'paw's day...