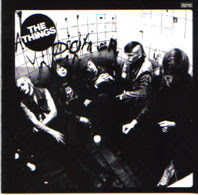 The Things “Some Kind Of Kick” (Nicotine) provides a full on pummel not unlike The Jim Jones Revue album. Their relentless old school teen punk is designed to be played with the volume on tilt. They’ve discovered and forged their own identity. I think I’ve said before that it’s down to the keyboards. The result owes just as much to the first Modern Lovers record as it does to any psychobillious pshennaigans.

They’ve managed to inject a fresh energy into the common or garden take on the garage disease. Plus they have youth on their side. Maybe that will construct a bridge to lure future generations away from whatever the latest dilution of the already fetid Libertines oeuvre toward the original source. Did you watch that Cramps clip I posted yesterday? Tell me one act that you’ve come across lately that even comes close? In terms of excitement, then these Dublin kids at least have a shot.

What The Things are pushing is nothing new but then again what is? Kudos then that they haven’t just reinvented the wheel either and this particular chemistry should provide some high octane thrills for those of you that follow a particular persuasion. I hope they retain this snarl for some considerable time to come. The album closes with a reflective, relatively slow song called “Sandy Tells Me”. It fuses something of Inspiral Carpets with early Gun Club. Let’s leave calendars and time out of it and present you with the fact that that these kids have made a bloody good debut album. That’s enough to be going on with. 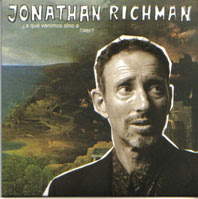 Talking about The Modern Lovers, Jonathan Richman has a multiple language album “¿A Qué Venimos Sino A Caer?” out on Munster. A collection of songs sung mostly in Spanish, French and Italian. Recorded at his home in San Francisco and also Tarifa in Spain, right by the Gibraltar Strait, close to Africa. There’s one exception in English, the sublime, acoustic northern soul vibe of “My Baby Loves Loves Loves Me”. As far as I know this is a special edition and what’s more there’s a limited vinyl pressing so you might want to grab that before it vanishes.

Note to self. Go upstairs and fetch the ML debut. A fitting close to an excellent musical weekend just prior to turning back into a pumpkin, or maybe that should be punk-kin?
Posted by Lindsay Hutton at 4:39 PM 2 comments:
From: Leee Black Childers c/o Murray Ramone/Shock and Awe myspace...

Rock and Roll Evolution. On the evening of January 30th, I will be appearing onstage in the Purcell Room at The Royal Festival Hall discussing the strange but true source of glam rock and its inevitable bastard children. Through a show of my photography throughout the 1970's, I'll show rock and roll springing from the teased wigs and false eyelashes of the flaming creatures who once walked the streets of New York -- to grow into its true culmination --ANARCHY!!!

I was just trying to figure out when the last Shoeshine Records showcase for Celtic Connections was. I think it was 2000 but I don’t altogether trust anything I think anymore. So something like 9 years down the ‘pike, it was time to do it all again. The ABC in Glasgow is a great venue, the sightlines are excellent I don’t think I’ve ever been at a show there with bad sound. Seeing an act on a proper stage makes all the difference. For everybody.

Boa Morte (from Cork in Ireland) kicked things off with their soundtratmospheric mood music. Lost a wee bit in translation and even in direction in places for me but they have their moments. The fact that they were playing as people were coming in was a distraction and what they do requires some concentration. And silence, because some of it is very quiet. I guess you could call it post rock with an organic twist.

BMX Bandits set only just seemed to begin when it was done. With most of the songs coming from “Bee Stings”, the eight piece line up literally soared. I heard some people in the lavvies complaining that they should have closed the evening. That kind of controversy is what makes the world go around. “Witchi-Tai-To” was equal parts stunning and mesmerising. It left a massive jag of positive energy in the room. Update - bandits interview here.

It was a surprise to learn that Norman Blake and Euros Child hadn’t done the duo thing in public before. This bodes well for the eventual album that will be delivered from the two, possibly later in the year. Their Simon and Garfunkel vs McGuinness Flint stylings were just the ticket for an inclement January nicht. Closing with a song called (I think) “Cave Dance”, this is a real shapeshifter that goes from being Rockpile via The Beach Boys into a Ron Mael staccato prog via Suicide conclusion. They could fashion a whole EP out of this one alone. The have another show, at the CCA next Saturday (24th). Update - I forgot, the did a great version of "Love Is In Motion" by Michael Brown and Ian Lloyd's Stories.

I hadn’t seen Attic Lights since the opened for the Hacienda Brothers many moons ago. That was the last time I was able to spend time with the great Chris Gaffney so the memory is inseparable. They’ve come a long, long way and the Americana-esque tendencies have given way to distinct west coast (of Scotland) pop. It’s a pretty confident crew that kicks off with their “hits”. Delivering most of their recently release debut album, the presence of a string section (The Cairn String Quartet) really upped the ante. The Lights also performed their take on the Minder theme, “I Could Be So Good For You”, which will grace the new version of the TV show that is about to appear on Channel 5 shortly.

Can’t remember when the last time I saw a four band bill where at least two of them didn’t blow but this thankfully bucked that trend. The icing on the cake was the dj antics of Camera Obscura’s Traceyanne and Carey. Proving that slapping a cd into a desk between sets is an outmoded concept and I know the audience appreciated the human touch. I’d like to go on record at this point to say that I was sold way before they played Arthur Alexander. Andy Dunkley would be proud of you ladies.

You can find photos of all the bands here.
Posted by Lindsay Hutton at 9:04 AM 1 comment:
Newer Posts Older Posts Home
Subscribe to: Posts (Atom)