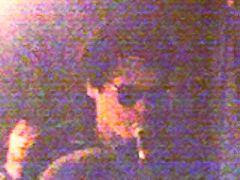 Back from a short trip to London in the company of my friend Jos, who made the trip in his guise as A&R man for the A Fist Full Of Records label, while I was just along for the ride. I'll spare you the touristy details of frustratingly long walks because of our incomprehension of the local bus services, not to mention the insane exchange rates, that had even relatively well-off guys like us screamin' out in disgust, and get on with our more, uh, rockin' adventures. Friday night was off to the Dirty Water Club, where apparently promoter P.J. had seen his original line-up for the evening disappear into oblivion mere hours before things were set to go. On such short notice he came up with Colt 45, a London trio in the 1976 Gorillas/Jook line of power-pop/rock (they even had a Jesse Hector lookalike on vocals/guitar!) that obviously appealed to my tastes, but in the end, despite some good songs, they failed to take off and send sparks flyin'. The Voxx is one of those bands that seem desperate for major label recognition, their every move taped out, not a hair out of place and with songs worked out to such an extent they were beyond reanimation. Oh, and nothing looks as stupid as an Englishman goin' for that NYC/fag/sleaze-rock image, it just doesn't work, they're still called Nigel. Thankfully we had better luck the next night at Ryan's Bar way up north in Stoke Newington where we caught Jos' latest signings Black Time (pictured) probably the hottest band the UK has on offer right now. 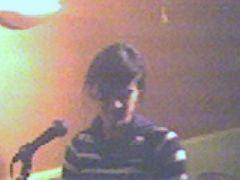 Set up on the floor of a tiny, crowded and hot basement, these cats 'n kitten deliver a fine punky/Cramped-up mess and have the drive, hooks 'n looks to take their brand of hi-octane rocket fuel way beyond mere garage-isms. Their records so far sound way too low-fi for me, their most recent Beat On The Traps sounds like an early Cramps demo, and there's nothing wrong with that of course. But if they could find their own Alex Chilton who'd be able to turn their rougher edges into something more sharp-ish, they'd be as cool on wax as they are on stage. By all means go check 'm out if you get the chance, you won't be disappointed. So there you have it, maybe I'll get back to you with a wax update later on.
(A tip off the hat to Matthew, P.J. and Steve)
PS: Did I mention I saw Marky Ramone walkin' down the street?
Posted by Jeroen Vedder at 9:35 PM No comments:
Newer Posts Older Posts Home
Subscribe to: Posts (Atom)