“Teenage Excitement, Romance and Mystery”. That’s our strapline. It could also be applied to the brand new album by Brijitte West and the Desperate Hopefuls. Ms West, with whom I hope you’re familiar, led a combo by the name of New York Loose. They should have been huge in the days when the record industry had some clout but for some reason it never happened. God knows why. In addition to knocking out a fine line in post-Max’s scuzz rock anthems, Brijitte should have had teenagers of both sexes crying themselves to sleep.

The whys and wherefores are irrelevant at this point because here are 10 great songs that have all the hallmarks of her former band injected with some hybrid vigour. It’s a glam slam, punk rockin’ good time with plenty of cheeky wee shards of her old stomping ground of NYC. Add a dash of Muffs/Fastbacks to the equation and what you’ve got is something that can’t be faked. It’s all about spirit and there are gallons of that here. “Mess of Myself” is the best Runaways song that Joan’s crew never recorded. “Hey Papito” must be a real crowd pleaser when they’re cranking it out in a club, gotta love the rumour of “Girl from Ipanema” that’s sprinkled in here. 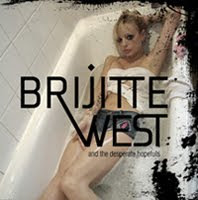 I’m thinking that the kids in Spain will love this. They know what they like and this has plenty of that. “All Roads Lead To You” has an infectious, almost Boston-sized riff that’s impossible to get outta your noggin. The skirl of those guitars is largely why the fuck we’re all here. Closing track, “How To Be Good” is a duet with Jesse Malin. I lost track of him when he started hanging out with that Ry*n Ad*ms dufus. Murray is always telling me that I’m missing out and this suggests he’s probably right. This is Suzi Q at her most Jackie DeShannon and would sound manifique blasting out of a little portable tranny and probably equally so on one of those iPod things. Keep an ear peeled for a couple of very tasty little “Chinese Rocks” flourishes also.

Let Brijitte and her gang lift you like the proverbial rocket. The listener will likely remain in orbit for the entire duration of the flight and for some time thereafter. Giddiness is a likely side effect upon descent.

The album is out on Devil's Jukebox on February 22nd.

Posted by Lindsay Hutton at 9:14 AM 2 comments: