Driving to the open prison this morning, a piece of rock hit the windscreen. I saw it coming too, like you would on the monitor of the Starship Enterprise but there was no way to avoid a direct it. It gave me an almighty dunt and left it's mark in a place that'll annoy the fuck outta me each and every time I get in the car. In many ways this is a metaphor for my entire existence at the moment. Where everything one touches goes the way of the brown smelly stuff.
If the way forward is really down to us out here in the trenches then why the hell does it seem so hopeless? On one hand, the old method of competition seemed to work perfectly well. In this age of so much information, I find it all kind of overwhelming. There's so much that it's blurring the view. It's not authoritative. How much more blah can we conceivably take? It might not always seem like it but an important part of this blogging lark - for me - is not to fall into repetition. But just lately, with everything else, I find the attempted regular updates to be something of a chore. On top of that, the bloody technology loses information, crashes and just plain makes me wonder why the hell I even attempt to keep the balls in the air at all. It's probably just a bad patch but it's getting harder to shake off. More of a slog with every given day. However, in an age when even Blue Peter is twisting our collective melon then what chance have we got. Not much but there is stuff out there that can make you think, just for a moment, that things aren't totally tits up.
Ladies and Gents, I give you Ben Vaughn's Geator documentary and The Skeletons ... and as SXSW shapes up to be to the music industry what The Edinburgh Fringe is to Channel 4 comedy, there are diamonds in the wannabe rough. Like Wooden Shjips, The Hazey Janes and top of my particular heap if I was out there... 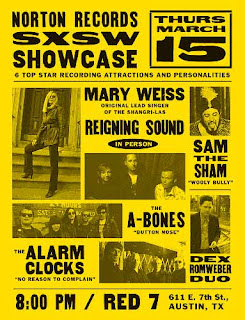 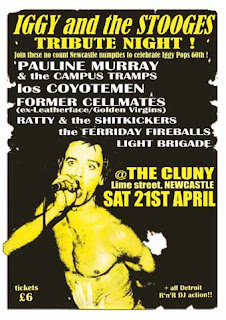