Don't forget... this coming Tuesday (21st June), The West End of Glasgow welcomes the ubiquitous STEREO TOTAL to Oran Mor for a gratis parading of their substantial repertoire - plus, Mr Cruickshank informs me that ADVENTURES IN STEREO will be joining them. The first show by this fine local combo in what seems like forever.

With ST currently providing their version of The Plastics "I Love You Ono" as the soundtrack to a Sony Camcorder TV ad, they could be about to break on through to whatever is on the other side of such a beastie. Hopefully massimo popularity...
Posted by Lindsay Hutton at 4:13 PM No comments:
News just in from Mr Percival, always the first on the block...

RHINO GETS WEIRD WITH THE RAMONES

LOS ANGELES--Hey kids! Tired of that bully kicking sand in your face?
Quit being a 98-lb. weakling! The Ramones will show you how! Now one of the hardest working bands ever gets a boxed set befitting its legendary status as Rhino releases WEIRD TALES OF THE RAMONES, a three-CD/one-DVD package featuring an amazing comic book, on August 16. Created at Johnny Ramone's request, the box is available at regular physical and digital retail outlets and at www.rhino.com for a suggested list price of $64.98.

Drawn from 16 action-packed albums, the 85 tracks on WEIRD TALES OF THE RAMONES' three CDs tell the whole musical story--from 1976's "Blitzkrieg Bop" to 1996's "R.A.M.O.N.E.S." The DVD gives fans the complete Ramones music video collection--Lifestyles Of The Ramones, making its digital debut, consists of all of the Ramones Sire Records videos laced together with interview footage and other interstitial material. Also included on the DVD are all six of the videos the band made while on the Radioactive record label.

How much would you pay now? But wait! There's more! While all of those Ramones songs and videos should be enough to make anybody happy, the super cool thing about WEIRD TALES OF THE RAMONES is the book that comes in the box. A groundbreaking band deserves something special, and this book is unlike any ever created for a music box set.

Included are comic book style ads for Ramones wigs, Ramones rubber masks, and "Sea Markys," as well as a 3-D comic complete with the necessary glasses. Words really can't do this book justice--one look and you'll want to be sedated.

Establishing themselves from the get-go with an unmistakable sound and a look that became iconic, the Ramones proved they had strength to endure. There are only a few groups who can truly claim to have changed the course of music history, and the Ramones are one of them. With WEIRD TALES OF THE RAMONES the original punks are immortalized in a manner befitting juvenile delinquents turned rock royalty.
Posted by Lindsay Hutton at 9:27 AM No comments:
Marek J spotted this on the Bomp Mailorder List...

BARRACUDAS, The - What you Want is What you Get
Ltd ed of 100 copies with signed photo! Jeremy Gluck and Robin Wills are back in action, this time with the addition of ex-Flamin' Groovies Chris Wilson. This is their first recording in more than a decade, three minutes of squalling, screaming and kicking garage punk genius, flipped by "Somebody '05", the reinvention of their
timeless "Drop Out With The Barracudas" classic. A brand new album is planned for the summer. Surfers are back! 7" $8

The album should be available at the end of this month. Soon as I know - you will...
Posted by Lindsay Hutton at 8:54 AM 1 comment:
Greetings this Saturday morning from Discombobulated Central. Things be still awry but I guess that's how such a fluid situation can inhibit a creature of extreme routine. Maybe I'm suffering from a mild form of depression because I never got any tickets for the Live 8 shows. And why? Because I never entered the lottery to win any. And why (the sequel)?? Because I have no interest at all in being "part of history". So thereby hangs a tale... I am so devoid of any kind of ambition that I've been wondering lately why? As others jockey and crawl for some crumb of "status", for some tangible link to what they conceive as normal or acceptance - I'm rowing frantically in the opposite direction, out to sea, lunch, wherever. As far away from what i consider to be a sickness as is humanly possible, hoping that a wave will knock me out of my wee boat and either drown me or wash me up on some distant shore, out of the all-enveloping bollocks once and for all.

The slide toward Scotland's lockdown is gathering pace as the world leaders of the apocalypse ride toward Gleneagles. The toothless call for a humungous number of people to descend upon this daft wee country gets more shrouded in stupidity with every passing moment. There isn't an infrastructure to deal with the possibility and we ain't talking Woodstock here. Fuck's sake, there aren't even litter bins in most rail stations because don't ya know there are terrorists waiting to blow our sorry arses off the main line between Glasgow and Edinburgh.

Tomorrow (Sunday 19th) is No Computer day. I ain't even switching it on, no matter how it begs and pleads. It's time to revisit the days before these things took control of my existence, I might even get to a casual schlepp through that pile of cds that are gathering dust over there just out of vision. My e-mailholism is out of control and isn't helping cod-fisted attempts to stabilse the day to day chaos. The turbulence continues and it's at times like this you need all the Fuck Y'All records you can get. But more about that down yonder road... 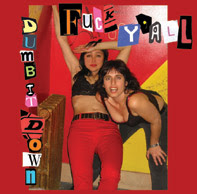