It was touch and go with whether it would be necessary to build a bloody ark today such is the non-stop rain. Almost all the wee, quick routes to and from the salt mine were closed tonight which meant that everybody was going the same way to get to the feckin’ motorway. Thankfully it was my co-pilot that was driving because it’s a pastime I despise. Particularly in the dark when it’s pissing down. A wee bit of a long road for a short-cut but we made it unscathed.

In addition, the visibility never got lighter than grue, grum grey all day. All part of the grinding down process at this time of year and the run-up to the seasonal stupidity. Things are pretty busy but it would be ideal just to slope off someplace. I mean really, in the grand scheme of things, who would even bloody notice.

Been toying with the activity of putting bite size reviews up here, sort of the length of a Twitter post with a link. The challenge being to capture the essence and provide a link to see if you agree. Of course, do or don’t… it won’t make any difference either way. The prospect of five recco’s every Friday went by the wayside, it required a modicum of focus. Maybe I just hear too much stuff, it muddies the perspective. Blunts the senses.

Don’t consider that a complaint at all, I’m just typing out loud. Or am I?

Very stoked about the prospect of Matt & Kim dropping by ith their management. Those two won the “Best Video” award at the MTV Awards last night for "Lessons Learned". No doubt on the back of the landslide of votes from readers of this very blog? Here’s a photo from the show last night. A dress rehearsal for Glasgow on Sunday I believe... 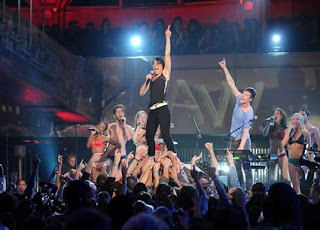