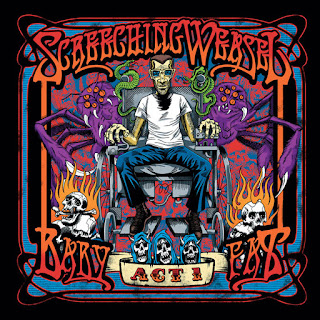 Three things happened last week that would suggest to me that rock’n’roll is not entirely deid (Scot lingo – not a typo). It may, more often than not, smell funny but rumours of its demise are still premature.
These happenstances were, the majesty of those Dictators songs being performed in a shithole that was not worthy of the performance. Due to virtually zero promotion or the actuality that Glasgow never stepped up to the plate, neither of those altered the experience of those that leave their midden heids (see ‘deid’ above) that Wednesday night.

On Thursday, Mudhoney returned and again rubberstamped their position as something way more than the pigeonhole they were saddled with. These guys swing. The other grunge – including Cobain’s crew – never did - in my opinion.
The third aspect of what restored my faith – and by no means least – was the release of Screeching Weasel’s “Baby Fat Act One”. It’s not often that I have high expectations about anything. It’s even less common that such lofty consideration could be exceeded but I’m hornswaggled to report that it has.
If these were the days of yore then this would propel the band into the stratosphere. Construed as a 'libretto', everything about it is extremely high-calibre. The sound is like those (Bob) Ezrin-produced Alice Cooper records, where pin sharp operatic guitars howl and this is the best example since “Welcome To My Nightmare”. But it’s also way more. The elements encompass shades of John Carpenter, Ennio Morricone, Jim Steinman and of course that Ramonic wallop. “Living Hell” reminds me of Compulsion, who other than Lisa Fancher remembers those guys? “All Winter Long” is just 45 seconds long and it could be the anthem for every summer to come. However, I just remembered – there is no justice. This section features Suzy Chain and BB Quattro on backing vocals. Line Dahlmann plays the part of Miserella and it’s an utter joy to hear her on here. My extended family done great.
So there’s Ben, Blag Dahlia, Kat Spazzy and Paul Collins too. All pitching in to make this something that would have taken a gazillion dollars to make not so long ago. And even at that – the realisation of such a project would have been down to chemistry. Not the amount of drugs the participants took dufus – the way the music and vocals interact. You could bring in any amount of alleged professional firepower and I doubt they’d arrive at anything half so incredible as this has turned out.
If only there was a way to perform it in some kind of live situation – "Baby Fat" would truly sweep the world. As it is, I’m not sure what songs could find their way into an actual SW live set. The current line up does (I think) feature on 5 of the ‘songs’ but the potential lack of context might render that improbable.
An often controversial figure, Ben sure went the extra mile to bamboozle the fuckwits that like to take internet swings at him from time to time. Believe me. You haven’t heard anything quite like this in a long time. Perhaps you never heard anything like it ever so all the more reason why you need to hear it now. Cut along over to Recess Records now and scratch that itch. CD and cassette (!) available now, vinyl out in July – thanks to the gimp(s) that head up RSD for the delay on that.
Posted by Lindsay Hutton at 3:59 PM 1 comment:
Newer Posts Older Posts Home
Subscribe to: Posts (Atom)