You hear all the time about Spain and its fiscal troubles, like the “big boy did it and ran away” ethos that is sweeping the world. We’re all fucked due to greedy, corrupt, way over the borderline scumbags so we might as well make the best of it before we’re all catapulted back into the stone age. Madrid is like heaven and hell combined, at least for me. And I mean both in the best sense of the word. Forget about basking in the sun in Florida – it was 42 degrees there on Thursday. I have never experienced heat like it. Like wandering around the coolest giant oven on earth but let’s try and figure out what happened there...

Stepping out of the plane into the heat was discombobulating. Got to the city after midnight on Thursday, dropped the bags and the crew met us at the bottom of Echegaray from which we sauntered up to El Fabuloso in Malasaña. Very nice quasi-50’s joint for the first of several mahou’s. From there we daundered up to Groovie bar. Another amazing hostelry in the grand tradition of just how this place is the last great rock’n’roll town on earth. Iain plotzed when he heard The Nomads segue into Radio Birdman in a bar sometime after 2AM. He was beginning to feel the force. I need to get back there to get a "Malasaña RocknRoll Resistance" T-shirt. From there we went to a place called Weirdo that was sadly shut but next time – it looks like my kind of establishment.

Then it was time to head back to barracks. Stopped in at Wurlitzer but it was 4AM and shaping up to be a long day at the outset. Don’t worry though, that was as about as sensible as it got.

Up early and time for a saunter which was about as fast as one could muster. It was even boiling in the shade. Much of Thursday was spent wandering up until it was time to meet Marcela and The Arnesens – a Dahlmanns offshoot trio (but only 2 were in town). A reunion that recalled that fateful night in October 2009 where our paths converged and I can certainly say that was a pivotal date in my existence. Marcela runs the other best venue in the world, El Sol - a perfect space in any definition of time. So there was time to eat, yatter and even go for ice cream in the run up to the show. Oh, and more drinks.

It was a deep relief to set foot in the Wurlitzer again. Even more so because the air conditioning was so bloody marvellously cool. Any worries about heat exhaustion were quickly put at a peep. Grand to see the gang again so we left then to rev it up at soundcheck and get ready for the rumpus.

Brother Clive had come from BCN with the cast members and was good and ready for that first beer I think. We weren’t feeling a lot of pain when we rolled back up to the door of the W. Always a blast to see Helena, Benito and Alvaro and t’was a pure pleasure that La Hembra Alfa could make the scene too. A lot of familiar and some new faces. It’s hard to keep track when you’re a doddery old git but Wurli is a strange fountain of youth that certainly does me the power of good. 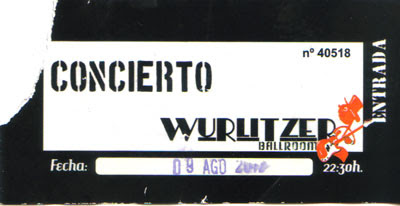 Hadn’t seen the Quattros since “Hank” came out. They were always magic but they’ve really gotten good in addition to just being a great combo in general. I could still be objective if need be but resistance is futile. The bang - bang - bang of the pace – no fannying about – should be used as a yardstick for all sets. Lean and mighty pop. Especially impressive was the disco-fication and Suzy has really gained ground in the owning the stage antics of performance. I was impressed and proud of my Barca crew.

As far as locations to see bands go, The pairing of Wurlitzer and The Yum Yums is an explosive combination. Other than The Dictators at El Sol, I don’t think I’ve ever experienced a start to finish rush as I did on Friday night. All the hits sung back by the packed crowd translated to a truly deserved love in. And this was no regular show because BB Quattro not only went through the paces with his own combo, he also provided the bajo for the Yums in addition to driving the 7+ hour journey. These wacky kids – who says today’s youngsters aren’t capable of hard graft? Actually, this is the guy who has kept The Yum Yums flame alive and if it weren’t for him then I wouldn’t be in this extended family situation.

So - in terms of “IOU”, I reckon I’m the one that should be tipping the hat. And I did have to wear one in the daytime during this trip. I’m thinking of getting a proper one. Whaddaya think? Of course I’ll never be as cool as Jimmy Sangster but I can try.

So much hanging out was done and the world was put to right several times before we called it a halt. Some of the entourage made it to the fabled 7am ceiling even although they were to be back on the road around noon. Others fashioned an outfit out of the hotel curtains and went to buy records before they jumped in the van. Wish we could have made the journey to Felipop too but that might have been too much fun. You gotta be careful at my age.

Next day was kind of fuglike and spent in lower gear. A return visit to Casa Murky + Eva was a hoot just like last time and from there to a wee gathering at Estela’s. We swigged Mahou high above the La Latina metro station and it was a perfect closer to a cracking couple of days away from what passes for reality (I hear ya Ms G). I was especially stoked to meet Mr Lagarto, the other half of mi amigette, Ms Ulla Munster. Hopefully they shall join us in future adventures.

A final farewell to the Wurli and our groovy hosts there and it was pretty much done. Met up with Iňigo for breakfast next day and it was time to scoot. Did I tell you this before? “I HEART Madrid” - so much so that a return bout is already on the horizon.

Muchas Muchas gracias to all of you folks that made us so welcome – you know who you are.
Posted by Lindsay Hutton at 6:24 PM No comments:
Newer Posts Older Posts Home
Subscribe to: Posts (Atom)