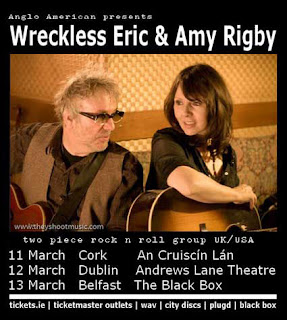 Posted by Lindsay Hutton at 3:44 PM No comments:

It had been hoped that today would have been a case of playing catch up. Things however, have not gone to plan and circumstances prevail that aren't entirely conducive to concentration. Shit, like it used to say on Axl's t-shirt, happens.
Posted by Lindsay Hutton at 3:35 PM No comments: 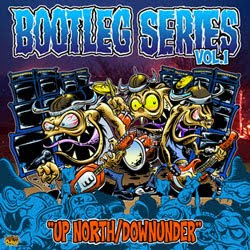 “Up North/Down Under” is the subtitle of Volume 1 of Bootleg Booze’s “Bootleg Series”. Obviously the contents are not illicit but like a strain of moonshine, it’s damn strong stuff. As the title suggests, Sweden and Australia’s raucous-est upcoming acts slug it out with the liner commentary supplied by Dave Champion and Craig “The Barman” Regan. You’ll be aware that this label only deals in the highest octane sonic firewater.

The common denominator is varying degrees of sounding like they were born in the Motor City. Detroit style rock is very much the order of the day and that’s pretty much a staple constituent of the finest gear from these territories. The Sewergrooves “Easy to Pretend” sound strangely like Franz Ferdinand might if they’d discovered the SRB. It’s difficult to figure what band comes from where, such is the continuity of spirit. There might be a hint of an accent here and there but when the vocals are being screamed rather than “sung” over a consistently boss racket then the lines get a little blurred here and there.

The emphasis here is on rock. Spelled R-A-W-K. Never lumpy, always blazing - of particular note I think the tracks by Leadfinger, Sure Fire Midnights and Rio Grande will tickle you, as will Sator’s take on The Weirdos “I’m Plastic”. It’s more “Hollywood” than Ann Arbor and they were “made to last” alright. The more astute will note the latter straddling the then of yesterday’s comp with the now of “Up/Down”. It’s hardly comfortable on the turntable until it’s time to flip the beastie over.

I realise these things don’t just come together overnight, or from under a gooseberry bush but wonder what’s in store for Volume 2?