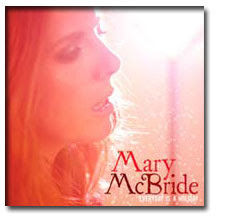 So after a shaky start to their UK jaunt, The Mary McBride combo made it North and hit Glasgow last night. It’s always a real gas to meet up with Joe and Springsteen’s oversight of not having him step into Danny Federici’s place is definitely Mary’s gain. So she’s on a bill with The Quireboys. I saw them soundcheck and y’know, in weaker moments I could even like them. That Faces, touch of glam, south of metal stramash is something I have a weak spot for. That’s more than I can usually say for the venue (The Cathouse) but last night was a minor sensation on that front because the sound for Mary and Co was actually very good.

I wasn’t really sure what to expect. I’d heard the tracks on the website and done a bit of digging but possibly reckoned on a more blues rock type set up. In actuality, what she does is very rooted in the pop end of rhythm and blues of the biblical variety, not that sub-disco malarkey. Her voice reminded me of Nicole Atkins and she can really belt it out as pure and clear as I think I’ve ever heard. In the right setting, she could blow people away and I think she made a few converts that will definitely be rousing the rabble for her next visit which will hopefully be soon. I also wasn’t aware that she cut Dan Baird’s “A Bottle and a Bible” before he did. Ms McBride threw us a storming version of that.

She’s a real sweetheart too and called the great Lou Whitney while we were hanging out. One of the relatively unsung rock’n’roll heroes of all time. Keeping up the Skele-quotient, JT did the very briefest snippet of "Trans Am" as they finished their soundcheck. I don’t remember the surnames of the guitar player or the drummer but I’ll clarify that down the road apiece. Bassman, Greg Beshers was in a band called The Pill Crushers that I wasn’t familiar with but their myspace songs sound pretty dandy. Couple of guys talked to him after the set and commended him for the band having done a W.A.S.P. song. He was baffled. Turned out that they meant “I Don’t Need No Doctor”, I think the conversation went onto be even more confusing with said punters thinking that Ray Charles had covered Blackie Lawless too. It’s all in the perspective. Or is it?

So Mary is plying her trade across the rest of the UK for the remainder of this coming week. Check the tour dates and if they’re in your town I think you’ll dig it. Unfortunately their Glasgow set was curtailed a little because Ricky Warwick ex of The Almighty was also on the bill. Robbie Fulks once said that country music is not pretty. That being the case, RW’s brand is downright ugly. He has an audience though and they lap it up. Me, I’m way too old for all that. So, to the Horseshoe Bar for a swift aperitif and it’s all over. A very pleasant evening all tolled and home in the bunker by midnight.
Posted by Lindsay Hutton at 1:26 PM No comments:
From Randy Haecker in NY...

Hey folks, my buddy Jenny Lens is taking discount pre-orders for her first eBook, and the subject is THE RAMONES. Her eBook will feature over 100 groovy images from the band’s first tour of the West Coast in 1976, most previously unseen by anyone except Jenny! This might very well be the first-ever eBook devoted to rock photography, so be a part of history and pre-order your copy today. You can get a FREE 16-page preview by visting the weblink below.

Ramones First West Coast Tour, 1976, Highlights, V1, the first in a series of eBooks from the Jenny Lens Punk Archive. The ONLY way you will see so many rare and large photos! Limited intro $15 sale. BUY NOW before price goes up!

BUY NOW (or for more info)

HELP SAVE the Jenny Lens Punk Archive! My work has been published more than anyone in LA, very likely in all of punk, 1976-1980, in ALL the numerous major books published the last three years.

With YOUR HELP, the archive and my work can survive. Thank you from the bottom of my heart. And please spread the word!

Ernestine Anderson - Moanin (BBB 1967)
Uploaded by soulpatrol
Posted by Lindsay Hutton at 11:52 AM No comments:
I need to go out into the cold and do a quick Tesco raid but meanwhile, If you're looking for an excuse to sit in front of the computer, check out these links to cool stories on the old days of NYC clubs. H's thing on Ruth Polsky is great. Yesterday would have been her 52nd birthday.

Amy Rigby sent me this link to Andy Schwartz's piece on Tier 3.

Now most of the action has moved to Brooklyn but reading these you'll get a feel of how it can never be again. Not nostalgia, just real reminiscences from the folks who were there.
Posted by Lindsay Hutton at 7:43 AM 1 comment:
Sad but inevitable.