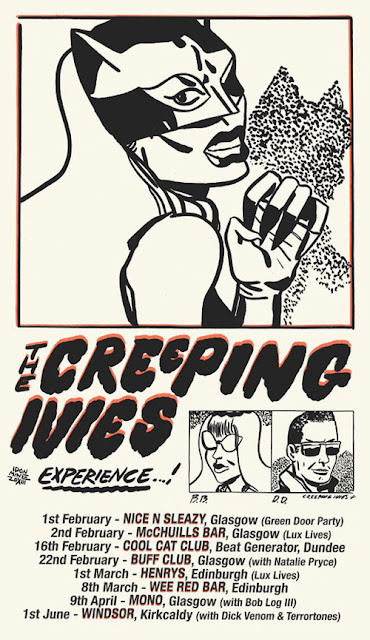 Posted by Lindsay Hutton at 9:08 PM No comments: 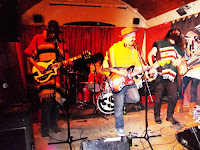 Just weeks on the heels of his Glasgow Nortonthon down the road in Mono, McChuill’s was the setting for Mr D’uffs fourth annual LUX LIVES extravaganza last night.

It was a non-stop revue once things got going and this is going to be pretty tough to beat both in terms of the east coast match on March 1st and next year hitting 5. But he rises to a challenge does Colin...

At this point in time I have no recollection of what everybody did. Not because of over indulgence but just because I’m losing brain cells at a rate of knots. Los Tentakills were up first and set the bar pretty high right there with a version of "Surfin’ Bird" that rang in my ear (I was right next to the PA) for the rest of the night. Next up, the one man rockin’ machine that is The Charles Randolph Rivers Slim Rhythm Revue ixnayed a one man trawl through “Sunglasses After Dark” for a heavy skiffle crack at “Mystery Plane”. 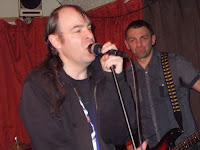 Mondo-A-Go-Go tackled “Surfin’ Dead" and won. I can testify to that. This almost never seen combo came out of the woodwork specially for the occasion. Nice segue of “For The Love Of Ivy” into The Creeping Ivies whose short, sharp tear through 4 songs wasn’t nearly enough. They could have snuck in one of their own but they didn’t. They’re back in Glasgow on February 22nd and soon they’ll have vinyl copies of their debut album “Stay Wild” available. 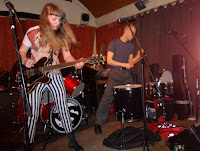 Z28 bludgeoned “Potentate” in a manner not unlike Nine Pound Hammer and veered near to Van Halen here and there. Both amusing and disturbing in equal measure. The Primevals came on to some technical hiccups during a rendition of “Two Headed Dog” but were blowing a full head of steam by the time they signed of with a locomotive-injected roll that was their “Drug Train”. Hysteria wasn’t too far away by the end of that.

Up next was The Fnords but I had to go catch a train and got the one before the last one. Not quite a zoo but a pack of foul-mouthed women made it an interesting journey. You should have heard it. As limited vocabulary goes it was a humdinger especially with the added ingredient of slurred speech due to too much bevvy. Now anybody that knows me is aware that I like and partake of the vernacular often but this was off the scale unlady-like. Forget the Drug Train, this was a whole 'nother world. 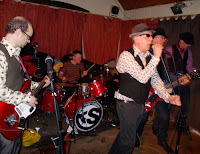 So yes, mark those diaries for March 1st. I’ll link to the info as soon as it’s available. Yes I said I’d update every day and I didn’t yesterday but maybe I’ll do another later today. Then again I may get sidetracked and I’ll be gone until what passes for summer. Is there any point to this? I’m not sure.

Nearly 34 years after The Cramps performed their first show on UK soil in Glasgow, it felt bizarre to be in a packed room where everyone seemed to be getting what they were about. This felt like progress until I hit the mass night-life where the real zombies hang out. The ones that always leave their minds at home.
Posted by Lindsay Hutton at 4:29 PM 2 comments:
Newer Posts Older Posts Home
Subscribe to: Posts (Atom)