Feels like I made progress today. Even have 90% of my OX column done for filing tomorrow on schedule. Joachim will believe that when he receives it of course but it's almost there.

Did you see "Super 8"? If not then you should because as old school hokum goes it's really great. never really got "Cloverfield" but JJ Abrams and Spielberg have crafted a blinding slice of entertainment that's worthy of the master, Joe Dante himself. S8 works on SO many levels and you have to stay right until the end of the credits to get all of the benefits.

Seek it out at a cinema. As I often say - I don't care how big your TV is - just trust me. It reflects an America that simply isn't allowed to exist anymore and I miss that aspect.
Posted by Lindsay Hutton at 8:37 PM No comments: 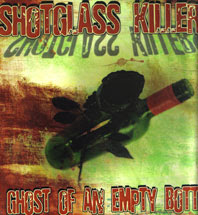 The Shotglass Killers “Ghost Of An Empty Bottle” (Devils Jukebox) has the lowest fi cover art that I’ve ever seen (maybe). It ain’t giving much away about the content at all so to that end this is hiding their light under the proverbial punk rock bushel. It has to be said that the vinyl/CD combo sports altogether more inviting sleeve art and if you’re gonna score it, that’s the one to plump for. (I scanned this image from it but the scanner bed wouldn’t play nice)

Once inside – you’ll find high octane rock’n’roll action of the style one might arrive at if Nine Pound Hammer collided with The Boys. With great anglo-girl vocals.

I guess that a “selling point” might be that Brian James plays guitar on “He’s Got Style” and that he produced this but the actual attraction is that hardly anybody does this kind of thing this well these days. It’ll fairly rattle your cage unless I’m mistaken which I have been known to be but not about this, trust me. There are some nice wee guitar harmonics amidst the general melee that save it from becoming sludge by cut 3. 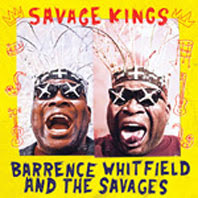 Barry White is back. But you know him better as Barrence Whitfield. “Savage Kings” on Munster sees a regrouping of original Savages (Peter Greenberg and Phil Lenker) with some newer recruits on drums and sax.

For those who don’t know, Barrence was the original Cee-lo Green . In terms of soul shoutin’ then the first two albums are pretty much unsurpassed. You know what Mojo mag keeps telling you the JJR are? Well, these guys were doing it way deeper several generations ago.

And it seems like rubbing at that same old thing (“It’s Mighty Crazy”) has paid off because I think the band is due in Europe right about now. “SK” kicks off the jam with a version of “Ramblin’ Rose” like Otis Redding might have performed it. Their take on “Shot Down” hits a cool groove too by being brought down a gear from the way it’s often hammered out. This restraint really resonates with a big phat bangeroonie!! The set was recorded in Cincinnati as a homage to King Records for that label’s lasting inspiration to the band.

One of the last things I have to do on this earth is to catch these guys do this in person, somewhere in the wondrous climes of Madrid preferably.
Posted by Lindsay Hutton at 8:18 PM No comments:

(Tack Mr Ulf for the link... I couldn't find an embed code)
Posted by Lindsay Hutton at 11:15 AM No comments: