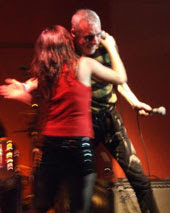 There’s been a slew of commemorative 30 year milestones lately. They’ve been turning up like buses. My latest is darkening the door of the 100 Club in London and it hasn’t changed at all, at least not noticeably. Yer veritable Oxford St time capsule. T’was also the anniversary of The Adverts “Crossing The Red Sea”. TV Smith didn’t go the way that so many “survivors” do and devalue the material that meant so much all those moons ago. It would have been nice to see Gaye brandish a bass again to be sure but one presumes that she doesn’t have the notion to. But the next best option is to enlist the aid of some firebrands from Spain who know the songs inside out and can inject them with new-found propulsion.
That “secret weapon” is The Bored Teenagers and they are to TV what The Wondermints are to Brian Wilson. Smith has worked long and hard to maintain a career and his relish to keep moving forward is what sets him apart from so many contemporaries. To see him invigorated and quite obviously loving it was a real treat. He’s a great performer. Pure and simple. Maybe not rich but what he has in terms of respect from his audience is worth more than bagfuls of filthy lucre. There was a healthy contingent of folks from all over that made the pilgrimage because they believe. An interesting notion in these days where individuals switch allegiance more often than socks. I hope that they can do more shows and that you folks can see it in full flight. There’s some YouTube stuff to give you a flavour here and here. And you can check out the TV website here. It was also very cool to meet Kris Needs. Nice geezer. He even had a cheeky wee play of The Vice Creems at the end of the night. Bless. 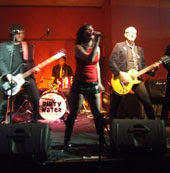 And those “Teenagers”? Well they’re three-fifths of Suzy Y Los Quattro. Having missed their UK debut last May in Liverpool, I wasn’t about to miss out again. Imagine The Ramones fronted by Brenda Lee. Or maybe Debbie Harry with Screeching Weasel or indeed neither of those but you'll get the idea. Suzy Chain is the kind of performer that could have legions of young (and old) males crying themselves to sleep the way that some of my crew used to sob over Clare Grogan. There’s a risqué innocence (or should that be innocent risquéness) about the way she prowls the stage, cute as the proverbial button. These are infectious metallic teenage bubblepunk anthems. A cover of “Rock’n’Roll Love Letter” favours The BCR version over that of The Records. That small detail outlines these kids supreme-eority. Of course that’s not a real word but it ought to be. A fleeting visit by the aforementioned TV Smith feller during “New Church” was a nice touch also and added to the sense of occasion.
It felt like the spirit of Joey was there in the room smiling on us, bathing the attendant crew in his positive vibes. I know he approves from that big Paul’s Lounge in the sky. I’m not prone to this type of thing, but from the minute they took the stage a big fat grin broke out across my kisser. It was seamless, bang, bang, bang. Jonathan told me that he was given some sage advice by the Handsome One during a Dictators tour of Spain that he really took to heart. SyLQ are fun personified and have the power to make you forget that outside of the venue that there’s a big, fat greasy world that’s out to fuck you up. This is good old loud pop music, bashed out the way nature intended by very cool people. A very special commodity.

Part of another fine DWC triumph curated by Prof. Crittenden, Los Cretinos started the evening well but played just a tad too long. The Demons Claws drew the short straw and had to follow Suzy. Their southern-countrified space rock didn’t hold no water for me. Perhaps under different circumstances, where we hadn’t just been rocked within an inch of making fools of ourselves. Dave liked them. He bought their cd. They also have a split 45 out with The Black Lips on Norton as well as recording for Larry Hardy’s “In The Red”. They have excellent credentials like these and an upcoming French show with The Fleshtones. TDC have all this but no Suzy Chain.
The Hollywood Sinners name doesn’t do them justice. It sounds generic and conjures up dice and lucky 13 tattoos but they specialise it short sharp blues jags. Like Mudhoney wrestling the Sensational Alex Harvey Band while rolling down a flight of stairs to the soundtrack of a rockier end Real Kids. To say they’re “hopped-up” is an understatement, like a bunch of hyperactive kids od’d on e-numbers. It’s a crazy, no holds barred spectacle and they cover The Len Bright Combo so what’s not to love.

And it’s all over, quicker than it began. Four bands is sort of too much to take in. Particularly when one of them is as sharp as my friends from Barcelona. It’s another steee-rike for the enclave of good music that is the Dirty Water. The Boston Arms is a mighty good home. Met a lot of great people over the course of the whistle stop including Chris and Clive from the Surfin’ Lungs who are headed for Spain to tour very soon. That country is giving the rest of the world a good rattle around the face in terms of rock’n’roll appreciation. Me, I have to brave the garden now and tussle with the hayfever fairies in a bit to tidy the bloody place up. I’ll be hyperventilating by the time I come back in but it’s about time I was punished. I just had 48 straight hours of hijinks after all.