My absence on this here NBT blog is generally due to my ongoin’ travels thru’ the mid-70s US underground. Diggin’ thru’ yellowed magazines, searchin’ the web and usually comin’ up with more questions than answers. Over the past week one label in particular has kept me occupied, that bein’ the Kiderian discerry outta Chicago. Seein’ the Boyz 1975 single Laughs On Me described in Bomp magazine as “acid folk”, my interested was peeked and I quickly located a copy on the web. And a pretty good disc it is, hardly “pre-punk punk” as it’s often listed, but a solid pop tune anyways. A review of this in a 1976 issue of New York Rocker mentioned that these guys had more tracks available on a label-sampler, which again was not too hard to find on the web. Goodbye Dolores – A Kiderian Records Sampler is none too spectacular, some nice enough 70s pop, but the two songs from the Boyz 45 are the only stand-outs. The sleeve is something else tho’, my first impression was that it was the soundtrack to some cheapo soft porn flick, but as there is no mention at all of this bein’ so, I guess there’s gotta be some other “theme” here. The main guy in the pictures has enough hair to start a carpet business and I’m guessin’ this is label owner/producer Raymond Peck. But who’s the girl in various states of undress? Could this be the Dolores mentioned in the title? And what has she got to do with anything? Did she die? (there’s a pic on the sleeve of the guy sittin’ behind a tombstone). The final song on the album is titled Goodbye Dolores 72-76, which might indicate that the “Goodbye” is merely referring to a broken relationship. Who knows.

Anyways, I was intrigued. Thanks to the wonders of Google I soon found out that Kiderian was launched somewhere in the mid 60s and released some authentic garage 45s. Their second release was Girl I Need You by Nobody’s Children, who’s singer did a remake of that tune for the 1976 comp (or is it the original version?). Some of the other releases by Mourning Daze and Creme Soda are high priced items these days as well. Back to the Boyz, according to Fuzz, Acid and Flowers this band dates back to the mid 60s, with two release on Destination and an earlier issue of Laughs On Me on I.R.C., it then goes on to state that “this outfit was supposedly born out of The Phaetons and from The Boyz went on to Grim Reaper, Fuse and eventually Cheap Trick”. One of their earlier tracks can be found on Highs in the Mid Sixties vol. 4, which also mentions the 1976 sampler. Not too surprising tho’ as that LP gives the Bomp PO Box in Burbank as contact address. And since we sadly can no longer ask Greg for some more details I’m hopin’ that some of you NBT readers might enlighten me further in regards to this label and it’s bands. Any info is welcome, as are MP3s...
Below is a first attempt at a discography. Again, any additional info is more than welcome. 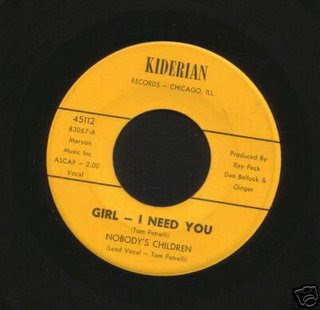 3335 Various – Goodbye Dolores, A Kiderian Label Sampler
Posted by Jeroen Vedder at 9:51 PM 4 comments:
Still grappling with the computer problems, hence the guerrilla posts here and there. Hope to straighten it out this week. This and life continues to hamper any consistent reportage from this end but there’s nowt else for it but to muddle in the direction that one presumes is forward. Doesn’t exactly feel like it from where this guy is sitting. Anyway a few bits’ and pieces, Mike McEchron reports on the Staysick list that “Don Willis died in Memphis March 1st. Maker of one of the all-time great rockabilly records Boppin' High School Baby/Warrior Sam”.

Was walking past Queen Street in Glasgow's answer to Hot Topic yesterday and saw a CBGB's shower curtain (at least that's what I presume it was). Oy and indeed vay. It does have The Fleshtones listed on it and everybody else that's played there in the trademark Village Voice ad style. It also reminds me of the funny MC Lars track about the Corporatising of Punk and Goth and reminds me that a Sex Pistols pencil case, as well as SP boxer shorts is NOT punk rock.

Monorail has a wad of the Yeongene & BMX Bandits cdEP “Save Our Smiles”, that’s come out on the Korean label Beatball. It’s an upbeat hullabaloo and includes a version of Daniel Johnson’s “Do You Really Love Me?” and a song called “Come Out and Play” which is not a Twisted Sister cover. Maybe they could have a stab at “We’re Not Gonna Take It” at some juncture…? I’m happy to pick up copies of this for anyone out there who might want one so e-mail if you fit that bill. Wish it was on vinyl but in this existence, as we all know, y’can’t have everything.

Inebriated is the condition that South Filthy’s "Crackin’ Up" was very possibly conceived in. The exit stage left of any inhibition which has resulted in a kind of gung-ho bizarre world take on something like The Highwaymen. A malcontent supergroup, sozzled and out for kicks as they loosely interpret a set-full of hugely enjoyable runs though a jungle of covers (Marvin rainwater, Ian Hunter, Tom T. Hall) and originals. They fall on their bahookies a couple of times too but that all adds grist to the rabble-arousing mill. This latest Licorice Tree release and continues that label’s high-scoring batting average. SF include Msr Jeffrey Evans, and Jack Yarber who corral in a seasoned bunch of reprobates like Mike Buck and Eugene Chadbourne amongst many others. Their interpretation of "Wimp" isn’t a patch on The Nomads but that said it must be a helluva sight to hear and behold the Filthy in a roadhouse or similar such establishment. I imagine that’s where it really comes intae it’s own. Their take on Gino Washington's "C'mon Let's Monkey" sounds like it was culled from the Venusian pressing of the Grease soundtrack. With extra grease. 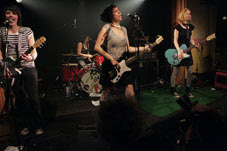 Boonaraaas photos from the recent Gloria Club show in Paris. This one by Eric Gill can be viewed along with many others by clicking on the links of the latest entry on the band's news page.

Check out Tom Morton's "Learning To Hate The Beatles".

US readers, only a week until the start of Season Six... 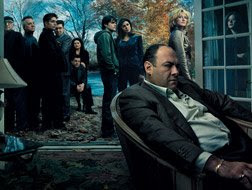 The new SHOCK AND AWE album - "SHOCK AND AWE GO HOME" - is released on Saturday April 15th, 2006. To celebrate we're having a party that night in the Subway Cowgate with completely FREE entry and special offer CD's for sale

A full night of entertainment starting at 7:30, bands all over by 10:30 but you can stay in the subway until 3am closing if you like. We'll be aided and abetted yet again by the legendary Paul Research doing his multi media art/punk/disco interface experience.

Next gig is at Queen Margaret Students Union in Corstorphine on Friday, 10th March (next Friday), meant to be students only, but if you fancy heading along, contact the band via the link above and they'll see about getting you in."
Posted by Lindsay Hutton at 12:24 PM No comments:
Newer Posts Older Posts Home
Subscribe to: Posts (Atom)