Even with the preventional shot in the arm from the doctors the flu still caught up with me this season... so here I am, sittin' bleary eyed, fever-ish an unable to sleep, tryin' to find some joy in these Youtube Nuggets; Amboy Dukes, Barbarians, Castaways, Chocolate Watchband, Electric Prunes, Knickerbockers, Nazz, Seeds, Shadows Of Knight, Standells, Strangeloves, 13th Floor Elevators.
Posted by Jeroen Vedder at 11:18 PM No comments: 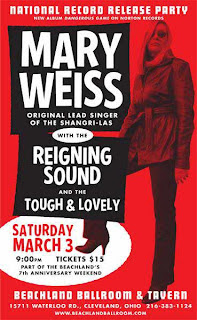 Posted by Lindsay Hutton at 6:47 PM 1 comment:
I think the new TripTych bill is announced today(?)... it includes Billy Childish show at The Panoptican in Argyle Street.

Caught the Scott Walker documentary 30th Century Man on Sunday. He's an interesting geezer that doesn't seem in the slightest bit insane despite his strange, dark leanings. Don't expect to learn much of anything about him just sit back and soak it in. The mystery of his oeuvre is what makes it tick and that is left pretty much intact. Hopefully the terrible sound on the print or digital media isn't something that will be evident when it does the rounds. I expect it'll be screened on BBC4 before too long. Now I need to seek out Pola X...

A brief upswing arrived yesterday in the form of a new Hello Saferide track "I Was Definitely Made For These Times". This will appear as a limited edition release on Regal/Parlophone on May 14th. Cd and vinyl, get ready to pre-order...

It's a dark foreboding morning and it's pissing down. It'll take something like the arrival of The Boonaraaas album to counter the gloom. Fingers crossed then...

And that's about it... oh yeah, Paul Burch is in Edinburgh a week from today at The Pleasance.
Posted by Lindsay Hutton at 7:01 AM 2 comments:
Newer Posts Older Posts Home
Subscribe to: Posts (Atom)