RIP - Alton Ellis
Posted by Lindsay Hutton at 6:38 PM No comments:
The Hound on Robert Quine (Friday Oct 4th Entry)
Posted by Lindsay Hutton at 6:31 PM 1 comment:
Woke up this morning, found out I had a share in the banking industry but still don't have a pot to piss in if you pardon the terminology. Not sure how all that works but it's something of a rum do. But anyway, it's all very fragile and I'm sure it wouldn't take much to have it all collapse in a heap again.

Yesterday's screening of "That Sinking Feeling" at GFT was a resounding smash. The film stands up very well both as entertainment and as a document of Glasgow at the time. Almost none of the locations that it was shot in are around anymore. Difficult to believe that it's nearly 30 years old. Stuart Murdoch (of Belle and Sebastian) did a great informal chat/q&a thing after the movie with Rab Buchanan of the original Bill Forsyth alumnii. He's a genuinely charming wee guy as anybody who has met him at The Tolbooth in Stirling will tell you.

The trailblazing ways of what Forsyth did made it possible for Scotland to become a player in the movie industry through this film. Everything else to this point was of a "Play For Today" style, drama made for TV. The formula seems to have almost gone the opposite way again since then. Being that a lot of projects are made for TV distribution but have a limited cinema run. So anyway, see "That Sinking Feeling" if you can. I'd love to see it in other countries to see the reaction, it has all the qualities of a silent movie and is thusly multidimensional.

Nice to see a film star on the last train from Queen Street too. Keeping it real like he did in the films before so called reality became a homogenised commodity. I think I'll watch Gregory's Girl tonight just to keep the vibe going. Looking at the visitor locations today, there was one in particular that I reckon was someone who I'd really like to hear from. Who I hope can let bygones be bygones. Here's hoping anyway...

I discovered this via Kip on the Bomp refugee mailing today who posted their version of Freebird, I like this one better but thanks for the info...

You may have caught my earlier post that Mick sadly died recently. If so apologies for duplicity.

I'm trying to contact friends and people who knew him, or of him and asking them just to pass the word around.

For the record (and i know it's a common name too) this Mick started off in Wasted Youth (original london version- not to be confused with dodgy american heavy metal version).

The Bridge House forum are on the case with the east end connections, so big thanks to Terry Murphy and Lee for their input. After that he was in a band called October Revolution who played around the early to mid-80's. Then a few splinter projects here and there leading to The Famous Monsters with Giovanni Dadomo (RIP) me and a few others who already know. I can pick most of it up from there but am trying to get hold a few ex-Monsters who I don't have contacts for.

I will be visiting Mick's Mums today and if she has on old phone book then should be able to fill in more gaps. Here are some blanks - Paul Romane (harp player - lived in forest gate, had a pink cadillac if memory serves me right and a recording studio in his house)

Deptford Andy - rotund erstwhile drummer, but better known as roadie of legendary proportions friend of deptford andy another roadie too.

Lou, Giovanni Dadomo's cousin who produced some of our demos.

Any help gratefully received. No funeral date yet, but will post here when known.

Tom
Posted by Lindsay Hutton at 6:10 AM No comments: 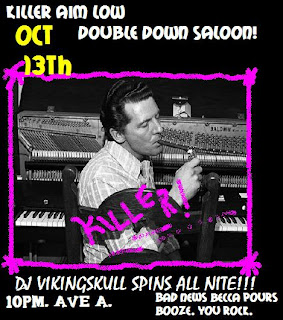 Here's some cool stuff for you crazy kooks around the world....

NEW YORK CITY, GET READY AND GET YOUR CUES OUT, DANCING SHOES ON AND POLICE RECORDS HIDDEN.....

Emma Vikingskull will be there 10pm - 4am spinning the greatest killer records you can imagine! Since the games are so and so legal... expect criminal tunes from heavy duty whackos! Bad News Becca behind the bar and as usual mechanic horse, pinball, run down bathrooms and free condoms will be present for whoever likes that kind of stuff. ALSO! 4 dollar Coney Island pints!!!! WHATTA DEAL!!! Ave A, btwn 2nd & Houston.

It's out all over Sweden. Git it!!!! Killer 6 page lowdown on Norton Records feat. full on interview with Norton bosses Billy & Miriam, great pictures now & then AND some cool comments from some of Sweden's coolest rock'n'rollers.... ALSO: Great NY travel guide and cool blurbs on great NY bands like Stalkers and Ex-Humans.

Apparently iconic freak Kim Fowley is playing some groovy stuff Saturday, Oct 12th. It's come to my attention that he'll be blasting off some cool intros and rockers off new Norton Records release Mad Mike Monsters... 3 volumes out on CD and LP. The show will be archived, but it goes of on satellite sirus radio noon-4pm E.T:

THE JADEWALKERS EP, produced by Ivan Julian (of Voidoids fame) is still available.
Get it! We're running out!
Posted by Lindsay Hutton at 12:44 AM No comments:
Newer Posts Older Posts Home
Subscribe to: Posts (Atom)