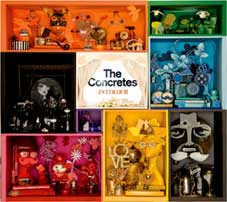 Monorail Music is proud to announce that the fabulous Concretes, from Stockholm, are to launch their new album, In Colour, in Mono on Sunday 12th March. We declared their self-titled debut a 'creepy masterpiece', and it was our album of the year in 2004. In Colour is even better; a rich mix of folk-pop, traditional northern music, and slightly wonky soul. From 9pm, with The Concretes in colour in concert and The Pastels on the decks.

This is a free event but you need to collect a ticket from Monorail.