To say this week sucked would be gilding the lily. In a perfect world I would just have stayed in Madrid but as you know it is not – and may never be – a perfect world. And furthermore, I mislaid what I had assembled and haven’t been able to sit down and gather my scrambled thoughts until now so here’s how I think it went from what is left of the fried circuitry inside my noggin.

Hit the ground running an hour or so behind schedule in the wee hours of Saturday. The rain made it feel like wandering around Glasgow and a tartan brolly was purchased for the princely sum of 5 euros.

Taking a cab to the vicinity of Weirdo! seemed like a good idea but those little streets are not easy to negotiate if you don’t know the general direction. I’d been past there before but obviously from a different trajectory. After much wandering around in circles – the location was arrived at following an intervention by a rather peculiar looking blonde sherpa.

Weirdo! is a fantastic place and not weird at all. More like yet another watering hole that very much feels like home with cool art on the walls, Ed Roth models up on the gantry and some fine, fine music being served up by La Hembra Alfa and Mss Blanche Cucamungo – collectively known as Las Ya Yas. I found out that the owner Bratto, was a Los Ass Dragger, one-time Crypt recording artists. It was such a relief to get in there, I can’t even begin to tell you. From there, a pitstop at Wurlitzer spun out to the limits of 6am. It’s always a pleasure to visit this mainline to a grand time. It’s like Cheers with devil horns. Once again it rose to the heady heights above expectations. Satisfaction guaranteed.

Let’s see, now how did Saturday start, oh yeah – breakfast at Iowa, now a staple of any visit to Mad-town. Coffee, orange juice and “bikini”, always comin’ right up.

It was soon time for Pasablanca and some really fantastic local food. Good times. The deep fried breaded Buletos (?) are to die for. If you visit Madrid then I’d very much recommend this place. Big thanks to Sara and Blanca for schlepping us over there.

From yonder, the troupe headed back toward the square that I always find myself in close to Chez Munster. Indeed Inigo came out to join us for a bit before everyone dispersed for pre show siestas, protests and more aperatifs. Dropped in to Castle M with some gear for the little Munsters – Luka and Gari. Lukas is going to be Lux Interior when he grows up. Gari, well - he’s gonna be in charge of ruckus inc.

Just a short breather to roll some giveaway posters up and then a wander up to Wurli where the soundchecks were just about to get underway... no sleep til’... Got a little lost again as El Stupido (me) totally blanked on where Marcela and Raquel were. Ended up making for Madklyn and another dose of whereduhfukawe? Another amazing hostelry on the site of where Garage Sónico used to be. This is of historical significance to our tale because it’s where Las Ya Yas met.

Hostess Blanca (a different one from before) used to work in Sarti’s in Glasgow, tis a small world. So many great bars, so little time. Hmmm, that sounds like a blog waiting to happen? I could just relocate to Madrid and “review” all these joints?

Fantastic to hook up with Ulla + Lagarto again and I think The Down Down Downs were on when we got in there. It was all becoming a bit of a blur. The Downs recreated a Hope and Anchor vibe for a while by batting out pub rock chestnuts. “I closed my eyes for quite a few minutes and they were gone” and it was time for those Dahlmanns. As you know, I am entirely biased but they were even better than when I saw them in June. Limbering up for the impending US venture – full show dates and info coming by the weekend – they even threw in the new tune “Lucky” that sounded like an old friend already. 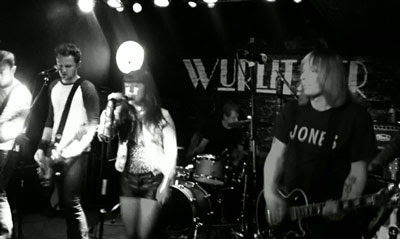 Quite a few attendees came up and told me they dug it so I felt vindicated and proud of the kids for managing yet again to confound a jaded old git some years past his sell-by date. There was a lot of love in the room in addition to the spirit of a sadly absent friend. So much carrying on went into the small hours again. The youngsters apparently got back to their hotel around 8am, less than a couple of hours before they had to head for the airport.

I’ve said it before and I’ll say it again. This is the greatest rock’n’roll city on earth. If there’s a better one then by all means send in your nomination. I LOVE Madrid and those crazy Madrilènes that make we visitors so welcome. I’m too old to be doing 36 hour marathons but somehow the magic of this city fires up them old duracells. The passion and sheer good-timery that these people possess is surely a lesson to us all. May they never EVER lose that particular BEAT! Not EVER!!