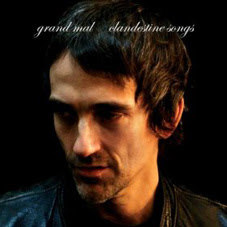 Grand Mal’s “Clandestine Songs” (Groover Recordings) is like one of those old faithful New York City albums. Fans of old time Lou Reed and Elliot Murphy will find much to savour in Bill Whitten’s worldview. It has the feel of the pre-Guiliani metropolis before Manhattan got turned into a theme park that approximated that location’s one-time greatness. Cool stories set to hard boiled tuneage the way they almost never seem to make them anymore.

There’s a rumour of Television too in terms of the mercurial guitar interplay. The piano is what skews it and ultimately adds that all important x ingredient. These are head turning tunes alright. If you heard one on the radio then you’d stop the car so you could write down who it was.

“Praxis Tape” is the most peculiar cut, like Santana if they’d started out in CB’s circa ’65. “You Done My Head In” is like a cousin of Mose Allison’s recent “My Brain”. David Dundas’ “Jeans On” as realised by the Velvet Underground. “Children of Light” is St Marks Place Motown. Classy gear. 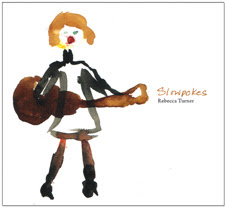 “Slowpokes” by Rebecca Turner is one of those albums that creeps up on you. It features my old friend Rod Hohl on guitars, that was a nice surprise. Some of you might recall his playing with Mary Lee Kortes way too long ago. 11 songs delivered without fuss or clutter in a pop Americana style.

Rebecca has a voice that’s easy on the ear, maybe a little downwind of Suzanne Vega or one of The Roches. She calls the content “a casserole of styles” and that pretty much sums it up. If comfort food were songs then they’d sound like this. 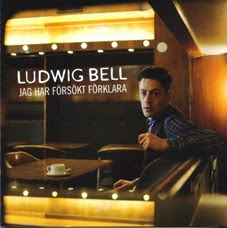 Ludwig Bell of Dreamboy (singular – not to be confused with the Peter Capaldi/Roddy Murray/Craig Ferguson combo) is just about to release his debut solo set on the rarefied imprint of Razzia. It’s a grandiose Aztec Camera-esque feast of sumptuous pop, all in Swedish.

I’m thinking of adopting “Jag är en Idiot” as my theme song, whaddaya reckon? Check out the video for “Kärlek Slutar Alltid Med Brak”. The Stockholm locations make me homesick for a session at Tranan. I am in relative awe of the roster that this label has a beat on.

Listen to all the upcoming Razzia gear...

Posted by Lindsay Hutton at 4:46 PM No comments:

A great version of a top song...

Posted by Lindsay Hutton at 2:24 PM No comments:

Mixed fortunes yesterday and the result that I felt fried after I got home so I just turned this thing off. I had the best of intentions too...

Rolled up to the station to catch the minute from noon train as I'm prone to do. Thought nothing of it. Managed to get on but only just. Surely all these people aren't going to see the "Gainsbourg" movie, I thought? And this might all seem light hearted now but it was a fucking nightmare. I'm pretty sure it was way over capacity - maybe not in indian terms - but certainly for here. Where are the health and safety zealots when you need them? OF COURSE, nowhere to be seen.

Anyway, the journey was hell. Spent ticking like a time bomb. I was thinking, what must visitors to this pathetic country think? Such a rinky-dink transport system and anything but even quaint. Getting off at Haymarket and ambling up toward the Cameo was quiet. That part of town isn't affected by the scumhordes. At the cinema, I thought that I was to have the place to myself but 3 other people came in. Still, not bad to have such a big space realtively unscathed. And you don't get pond life in there anyway, that's why it's a pleasure.

Dug the film and the two hours passed quickly. No one who has an interest in it's subject will be disappointed. It is a little peculiar though and the question of the music is largely dealt with in terms of the soundtrack.

From there, I headed down to try and pick up my Neu ticket but can't do so until the night so that was a bust. From there to the Book Festival location and that was totally chocka too so headed for the high street where it took a lifetime to go the distance of something like a block. there were that many people rammed in to see the poxy street theatre bollocks that I'm surprised there wasn't an incident. The tourist fleecing was in full swing. Couldn't really do what I set out to do up there so in relative defeat and bealing with anger, I went for the train home.

This wasn't quite so sardine-like but full of noisy bastards. Why does travelling have to be an ordeal. Even such a short distance? It's true, I could drive but that's even worse. Actually that's a misnomer because you can't "drive" anywhere once you get into town. It was with equal relief of getting off the train earlier that I arrived in Polmont wanting nothing but to get as far away from these trolls as possible. I mean no ill to actual trolls you understand. It was good to be back in the bunker where I yakked on the phone, ate and fell asleep watching something on TV. No idea what it was at all at this point.

Oh yeah, one of those spambot feckers has infiltrated the blog here and added a comment to the last however many posts. I can't be arsed removing them, there are more than twenty. This is a sign of the times, one of the many that steams my bean.

I intend to try and sort out some more reviews today. Let's see how that pans out...
Posted by Lindsay Hutton at 6:50 AM No comments:
Newer Posts Older Posts Home
Subscribe to: Posts (Atom)