Sohodolls do The Lords of the New Church

Download it free, Sohodolls is the seventh band on that page and you can grab "Open My Eyes" from there.
Posted by Lindsay Hutton at 7:00 PM No comments: 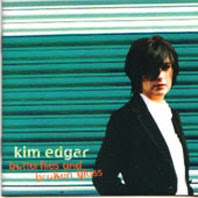 Back as the festivities were kicking off for the segue between years, you may remember my attending the David Scott Seasonal Shindig in Stirling. That's more S's tha Shir Shaun could shake the proverbial schtick at... The more alert of you will also recall my discovery of Kim Edgar, an artist who until then I’d never encountered. So anyway, since then she kindly sent me a copy of her debut album which reflects the chops that she displayed in The Tolbooth.

A wee bit of history then, Kim came to the attention of the bods who do Burnsong thing, this shouldn’t be confused with the tartan mafia that tend to hijack Rabbie’s work. There are many talented individuals who have been involved with this and so far none of them have appeared in an ad for the “Homecoming” if you get my drift…

“Butterflies and Broken Glass” contains 10 songs that fall outside the notion that this is just folk music. These are stories that convey the fact that Ms Edgar is not someone who could easily be associated with any particular pigeonhole. Karine Polwart and her band are evident across the course, indeed her husband Mattie Foulds produced this set. “Heavy Skies” is the cut that grabbed me most first. Like all good records, this takes a little time to settle. The heart tugging string-driven ambience of “Skies” is not unlike the mood set by Lou Reed on some of Berlin. “Cinderella’s Slipper” reminds me of Ivor Cutler but that might just be me.

I’m a wee bit loathe to mention Kate Bush but if it makes anybody sit up then there are shards of her influence to be heard here I think. Songs like “House on the Hill” and “Scissors, Paper, Stone” are destined to become favourites as Kim gains ground. The use of understated brass on the record is very cool. It punctuates the overall feel and almost sounds Swedish, on “Climber” in particular.

Great promise lies within this short introduction to a lassie that is destined to become very popular indeed over the fullness of time. 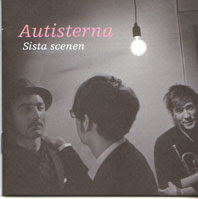 And talking about the fine climes of Sweden, it has been somewhat remiss of me not to hep you to the Autisterna album that Groover Recordings put out a couple or three months ago or thereabouts. “Sista Scenan” is the bands debut, all in their native tongue but such is their way with melody then you’ll hardly notice. This also reminds me that I don’t have the most recent Vapnet collection either. I wish Stacey Shackford would come back and get Glasgow back in the mix, Svensk-wise. 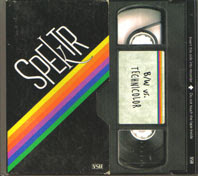 From Denmark via a Dutch label – SPEkTR present “B/W vs Technicolor” on Tocado Records. It’s John Barry in the realm of Robert Johnson and Punchdrunks via Messer Chups, designed to pay homage to the more esoteric soundtracks that have been laid down over the course of history. Manoj Ramdas was involved in an early incarnation of The Raveonettes and will join The Tremolo Beer Gut on their upcoming tour. These are imaginary themes to cinematic scenes you’d dig the heck out of seeing. Like someone had discovered a whole chestful of ITC TV show scores that never saw the light of day because they were too, too far ahead of their time.

Check out their myspace and choose your favourite and hope that this phenom might grace or shores at some point. SPEkTR reminds me of Señor Scott’s Mondo Morricone soundscapes. These compositions sound very like the people who influenced them but with a cool twist.
Posted by Lindsay Hutton at 5:06 PM No comments:
Join me in an experiment? Indulge an old timer to try and stick one to the smoke and mirrors merchants that are desperately clinging to some outmoded belief that there is a record industry. There is a music industry but that’s different and there are successful exponents of that who love music and buck the trends. Here's where we gird our collective loins and join those individuals who will see to it that there is a future in some way or another.

This experiment will set you back 79p. About 14 shillings and 20 old pence in pre-decimal currency by my reckoning, not even a flipping euro. It would be cool if you’d click on this link. While you’re doing so it is perfectly acceptable to yell or whisper (your choice) – I don’t want any of your goddamn versions of “Hallelujah”. No – I want to rock. The link takes you to The Rezillos "No.1 Boy" and if enough of us do this then we’ll get more. You can do this from anywhere on the planet and from outwith I believe.

I’ve no idea why it’s not on iTunes and I know a bunch of you use that but it’s not so we have to relieve ourselves using the appendage we’ve been graced with if you dig? It might even make a 7” single version possible somewhere down the line and you KNOW you want one of those…

Update @ 4pm: The single will be available on iTunes on the day of release but it would be cool if you could just get past the modernity of all this and just spring for the pre-order. It's all part of the experiment so get that old lab-coat out of mothballs and let's put the wind up the blighters. I don't ask for much and maybe it'll all fall on it's arse but It's worth a tumble methinks!
Posted by Lindsay Hutton at 11:54 AM 2 comments:
Newer Posts Older Posts Home
Subscribe to: Posts (Atom)