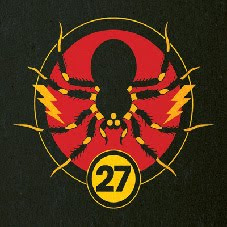 27 Forever! - Eight of the fourteen songs on The Riverdales “Tarantula” clock in well under two minutes. A prime example of quality over quantity and as concise a burst of pure punk rock abandon as you’ll ever encounter. The guitar on “Infection” sounds like Tony Iommi doing a John Cummings and the closest this combo may ever have come to “a solo”. Continuing exactly where Invasion USA left off, there’s not one gram of flab. They’ve got that crunch down pat by now and by time that the hopped up, almost Bo Diddlified “Girls Town” closes side one you have the exact time that it takes to flip it over to catch your breath.

“Soultaker” is a ballad of “I Wanna Be Your Boyfriend” proportions and I could have imagined Joey singing this one. There are even bells and at that point, if there was any composure left, then you’ll be toast. The doo-wop commotion of “Crash of the Moons” is equally potent. By the advent of “Time Chaser” you should be checking the listings to see if they’re playing anywhere near you tonight.

If you don’t get a charge out of The Riverdales then I really don’t know what to say. They’re shaking up a can of the very dna of everything I hold dear and true when it comes to life-affirming rock’n’roll. "Tarantula" is coming at you via San Pedro’s Recess Records in several formats. I recommend the footlong.
Posted by Lindsay Hutton at 8:15 AM 3 comments:
Newer Posts Older Posts Home
Subscribe to: Posts (Atom)