Six months down the line I'd like to toot my own horn here once again about the Chiswick Records blog. I'm down to posting pics of stickers 'n beermats right now, but figure that you'll all understand the cultural significance of these items...
Posted by Jeroen Vedder at 11:12 PM No comments:
OK, it seems to be working so let's try a couple more... 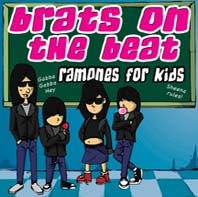 When I discovered this at Stereogum last night, my flabber couldn't have been more gasted. CBGB's may be gone but the tuneage is going CBeebies!
More info here. And at Go-Kart

Fancy Hallowe'en in Madrid? If only... but if you're there... 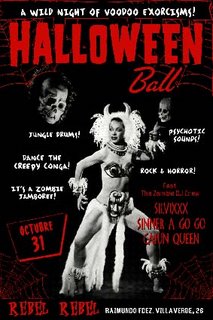 This is still acting up so i'm gonna quit while i'm ahead. I've added those Brat links three times and they keep "not appearing".
Posted by Lindsay Hutton at 6:35 PM No comments:
I was trying to upload pictures at about this time last night and the bugger wouldn't let me. So, I thought, sod it. However, i'm about to have another go. If pictures appear then it worked if not... altogether now...

First up some news about a bogus Beat Poets... 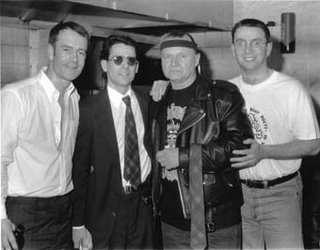 "Scotland's top surf instrumental band has thrown down the gauntlet to a group of upstarts from across the Irish Sea who are using the same name. In a row reminiscent of a spat between supermodels over the use of the title The Body (although visually not quite as stimulating), Glasgow¹s Beat Poets are taking legal advice over use of the name.
Events are likely to come to a head on Friday October 20 when the Belfast band make their first visit to the Scottish city. On the same evening as they play a support slot at Sauchiehall Street venue, Firewater, the REAL Beat Poets have arranged a rival gig at the much hipper Universal bar in Sauchiehall Street Lane. The Beat Poets were formed in 1986 by guitarist Tom Rafferty and saxophonist Keith Bruce. One of their first appearances was at a Glasgow Style Event at the Third Eye Centre (now the CCA) in Sauchiehall Street. The band made its first recordings for seminal 53rd and 3rd label co-founded by Stephen Pastel of Glasgow group The Pastels. Their debut EP Glasgow, Howard Missouri now commands a high price among collectors of authentic instrumental rock'n'roll, as does their debut album Totally Radio on Imaginary Records. The band were instrumental (dearie me) in bringing over the surf guitar legend, Dick Dale for shows in Scotland after "Miserlou" was featured Pulp Fiction. The band opened for his trio at the Glasgow Garage and in Edinburgh.
The Beat Poets have also performed with legendary Memphis singer and songwriter Alex Chilton. Famous for their immaculate stage attire and short snappy sets, The Beat Poets were once described by Tom Morton in Melody Maker as 'the best band in Glasgow'. Presented with a copy of their 45 Rebel Surf, guitarist Link Wray, who sadly passed away this year, remarked: "These guys are right now".
Despite inviting comparisons with The Majestics in John Byrne's classic TV and now stage drama Tutti Frutti, The Beat Poets have never stopped gigging and are currently gearing up for a spate of performances in November. The Universal appearance is an appetiser designed to warn off the usurpers whose presence in the city is bound to be confusing to fans of the original, long-established outfit.

The Beat Poets appear at The Universal, Sauchiehall Street Lane, on Friday October 20 at 10pm.