HEADING THIS WAY NEXT JUNE! 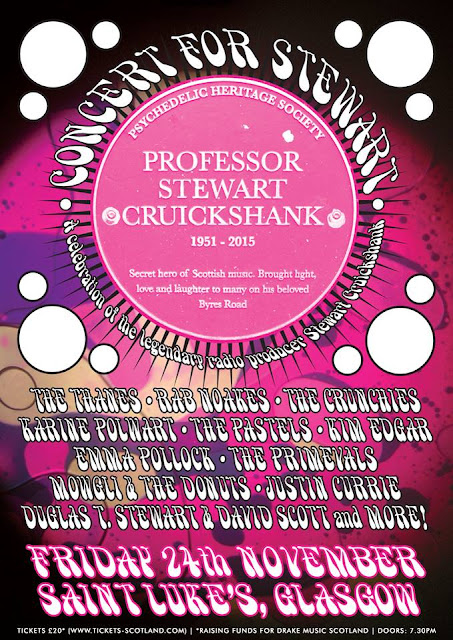 TICKET LINK!
Posted by Lindsay Hutton at 7:02 PM No comments:


Posted by Lindsay Hutton at 6:37 PM No comments:

The twelfth edition of the annual party out of bounds that is FUNTASTIC came to an end 5 days ago. We attendees are decompressing and wondering how it’s possible to throw such a shindig and actually gain momentum rather than lose it, probably something to do with gravity. Or maybe even those laws of physics that Scotty from Star Trek used to babble on about?

Whatever the hell it is, if you could bottle the atmosphere in this outta space bar then you’d really be on to something. That’s why folks go every year. To cavort in the UFO and let the freak flag fly. Southern Culture On The Skids even had a song (from their latest album no less) about such activity. However, as ever, I’m getting ahead of me’sel’. I was lucky enough to arrive in Alicante to be able to hitch a ride into the ‘drome. (Gracias Russ + Saskia)

A hen party arrived just ahead of us so that delayed getting to the ship. The opening stramash was in full swing and The Hollywood Sinners were banging out that racket in the way that only they can. The Meows (from Barcelona) followed and they specialise in Dictators-type activity which is never a bad thing. I was too busy blethering to watch much of Shannon and the Clams and they did just fine without me.

T’was an early rise for a dazed breath of air on Friday morning and later in the day, I made it to the beach and even went into the Med. It was warm. Anyway, it was there that Sara and I plotted some Sesentafest activity before heading back to prepare for what was always likely to be an extended session. It was time to pick up the wristbands that would allow us to get on board and John Schooley started the ball rolling with his one man band. It was still light outside and the joint was just filling up.

I missed Jon and the Vons and Hobocop, the latter are a variation on S&TC because I met some friends that I hadn’t seen since the previous flight. The Mindreaders brought this year’s taste of Medway to the Mediterranean next by providing a twist to some punk rock standards that really hit the spot with the crowd. It was at this point that I noticed Steven Tagg-Randall wasn’t shooting film. I still don’t know why. I miss being able to catch up.

I caught snatches of Futuro Terror and The Kaisers. Both raised the excitement level. Dirty Fences did nothing for me so I took that as an opportunity to go put on the terrible Dracula wig that I’d picked up in Asda. My mate “Heino” reckoned it was a bit (Dave) Vanian. Anyway, I managed to alarm Stella but not Maitane who busted me right off. The Neanderthals were perfect to close the live music selection on this Friday 13th. The numbskull frat rock was just what the soused crowd needed. Daftie reworks of garage classics. Todd-o-phonic Todd (Abramson) led the DJ action inside when they were done and it went hell for leather until 8am. Not Todd but a rolling collection of ace spinners through the night.


Disorientation was setting in at this point. This was further confounded when I tried to have the apartment building reception book me a cab. I had to have the guy bring a calendar to point that no, it wasn’t Sunday already. I took a birl down to Rockstar Bar where there’s always a happening and everybody seems like the night before never happened. There’s never anyone that looks like a burst ball. You get those special powers, I tells ya. OK, we’ve established that it was still Saturday and it was important that I get up to the venue this year to see Crackhouse. They include mi amigo Mr Bratto. Little did I know that they would provide the assault that probably my favourite of the whole shebang. They left me giggling like a little girl by the sheer magnitude of their stupid punk rock majesty. Puy saw me. I’m guilty as charged.

The Pacifics hail from Dublin and they’re like The Undertones crossed with Untamed Youth. Todd was smitten. Les Lullies are some of the guys from Les Grys Grys. They’re the Hellacopters/Aussie Rock take on what that band does. If they provide a gateway drug for youngsters to the stuff they plunder then I’m down with it. They throw all the shapes.

Control Freaks started fine and fell away but that was OK. There were people to hang in the outdoors with. The Gruesomes picked up where The Neanderthals left off. The Montreal combo were very entertaining but with only the front man retaining the hairstyles that put them on the map during the big garage scare of the 80s. The Revelators really whipped up the room with their stripped down blues holler. The Midwest monster precursor to folks like Daddy Long Legs.

There’s an FDC 45 with two outtakes available now from here.

Which brings us to The Schizophonics, I’d seen them in Edinburgh where a meagre crowd was treated to an animated set that left some of us breathless at the hyper-animated antics of front man, Pat Beers. He and Lety (drums) are also in The Little Richards and also the El Vez punk rock revue so we’re talking high calibre. The recordings thus far suggest a strong whiff of the MC5. Live, there’s a lot more going on – musically. Pat’s acrobatics seem to suggest that he’s not playing because how could he? In front of the packed FDC crowd, the energy level crackled throughout the room and afterwards I heard some chatter that suggested they were playing over a hard drive triggered during the set. People have gotten so attuned to listening to paint dry that they can’t accept this velocity of show. If you don’t like the music then fine, we can debate that but to gossip or harrumph with accusations of miming is really fucking short-sighted. If you flat-out don’t like them then that's OK but they’re about as far from faking it in these hyper-dupe as you can get. 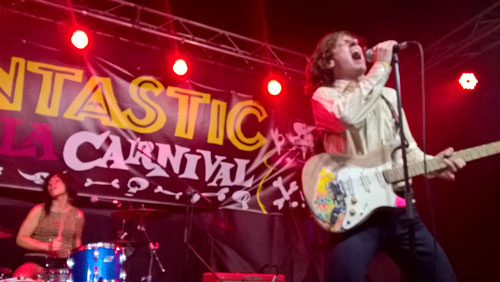 There’s a Scientists/Spacemen 3  type pummel nestled in there that maybe isn't evident in the recordings (yet). I also detect a hint of that sound that bands like Husker Du or those on SST were known to brandish. I don’t care for any of that but on this occasion it added to what is already a solid rock n’ roll foundation. This suggests to me that they might court appeal outside the circle of the converted. Encoring with “Looking At You”, I think that Rob Tyner would be proud. This rendition made me think of Matt and Kim if they had a motor city transfusion.

Southern Culture On The Skids will need no introduction to NBTsters. Something that really registered with me was how much Rick Miller looked like Lou Whitney. And for a minute I wondered what it would have been like for The Skeletons to let rip on the ship. These folks are veterans. They put on a great show and well, when the closed with the Ronnie Cook/Link Wray double header the place went berserk as only the Funtasticos can.

SCOTS scooted a little after 3 and because of a logistical glitsch (I made an arse of the booking) I needed to get back to pack, check out and take a cab to the airport at stupid o’ clock. Next year I’ll be staying an extra day. It starts with feeling like there’s all the time in the world then all of a sudden you have to leave for a flight at stupid o’ clock when all of your friends are still howling at the October moon. Several hundred Goo Goo Mucks going radge like it’s going out of fashion.

I managed to locate and bid farewell to a bunch of the kids and duly beamed myself back to terra firma just after the pyrotechnics. Meanwhile, the ship continued to birl for a few more hours. The moon would have been down and the sun would have been on the way up when the 8am descent into Benidorm got underway. I was on a different, way less appealing craft at that point wishing I was still giving it laldy with my homies old and new.

Paloma and Varo done damn pulled another chestnut out of the fire. Bring on Lucky 13!!

For a total pictorial, head HERE!
Posted by Lindsay Hutton at 7:22 PM 1 comment: 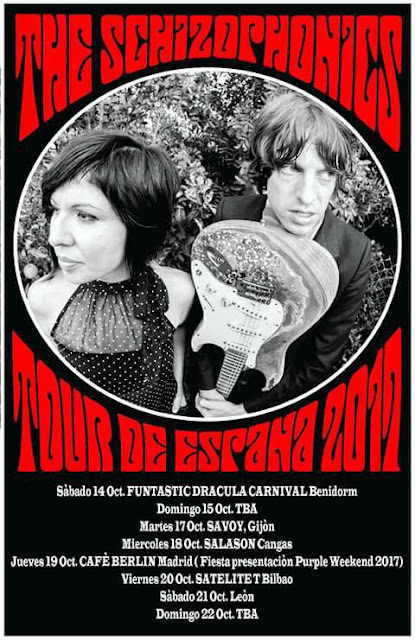 Posted by Lindsay Hutton at 7:17 PM No comments:

HELLO SAFERIDE the first time I saw them!


Posted by Lindsay Hutton at 9:17 AM No comments:


Posted by Lindsay Hutton at 6:42 PM No comments:


Posted by Lindsay Hutton at 6:07 PM No comments:

SPACEBOUND IN A WEEK!

Posted by Lindsay Hutton at 5:53 PM No comments: