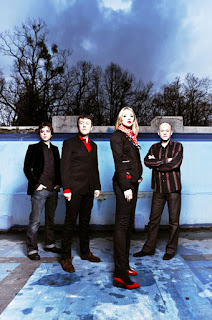 Very excited about the imminent release of the new album by The Bambi Molesters. Coming this week on Croatia's Dancing Bear label with a Glitterhouse version for Europe coming later (this?) month.

Posted by Lindsay Hutton at 3:30 PM No comments: 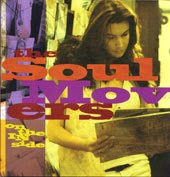 So we’ve been to-ing and fro-ing between Australia and Sweden these past few days. Sadly not physically but that’s the plus of this interweb thing, you can be someplace else in seconds. Heading back down under then and The Soul Movers “On the IN Side” that Career put out toward the end of ’09. This is a superior brand of what The Detroit Cobras are doing. These folks aren’t relying on mining obscure gems.

Their originals feel lived in and Lizzie Mack’s voice is a warm, honeyed instrument that just sits right. She reminds me of Frankie Miller. The Soul Movers count Deniz Tek and Pip Hoyle among their number. This is showing signs of another side of Detroit than what you’re used to hearing them play. I’m not sure what the story is with regard to live shows but I think they were in Spain fairly recently. This stuff would sound pretty damn sweet spilling out of the El Sol sound system for sure.

There are no fancy production tricks just an obvious traction with their roots and it sounds like they had a good time laying these tracks down. If they could somehow get on Jools Holland’s TV show, they’d be on the fast up elevator. 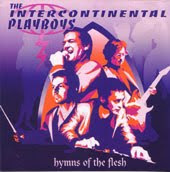 The Intercontinental Playboys (note – not incontinent) “Hymns of the Flesh” is a recent addition to the I-94 Bar canon. It’s unashamedly sixties-ish with a constant Hammond flourish to punctuate that. Fans of latterday Cramps and “Bad News” period Fuzztones will dig these guys. They’re not trying anything fancy and contrary to popular belief, the keyboard motif does not make them sound like the fucking Stranglers. They’re not out to change the world here.

“The Maestro’s Shadow” reminds me of The Johnnys and let me tell you, that’s no bad thing on a Sunday afternoon when the logistics of the next few days are about to descend. The Playboys could easily have been added to “A Real Cool Time Revisited” and passed off as a Swedish combo from the mid-eighties. That’s a compliment by the way. 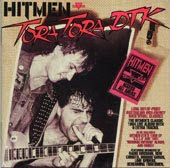 And finally for your listening pleasure, The Hitmen’s expanded “Tora Tora DTK”. The latest instalment in the Savage Beat resurrection of their catalogue, it includes their “Moronic Inferno” album and a host of extra gear that displays exactly that these guys were the antipodean Dictators. To the extent that Chris Masuak’s “Cowboy Angel” mini album even sounds like The Del Lords. I hadn’t heard this stuff before. “Tora Tora” itself is one of the great live rock’n’roll records. Up there with “On Your Feet Or On Your Knees”.

The band was writing songs that should have swept the world like those of AC/DC. I’m not sure what happened. Maybe there were no videos for MTV or maybe it’s just another case of not being able to see the wood for the trees. “Didn’t Tell The Man” sounds better to these ears than any old Clash bollocks you might care to recommend. They even did a cracking version of Shakin’ Street’s “Solid as a Rock” and also “Shake Some Action” way before it was hip to do so. That Barman, he’s a busy one because there are extensive liner notes here that explain exactly why The Hitmen are an important commodity. They’re another one of the bands that made it possible for you to see The Stooges. They never stopped being “Rock’n’Roll Soldiers”. Not ever. They’re limbering up to play shows around their homeland in April with Niagara. You’d be a fool not to see them. 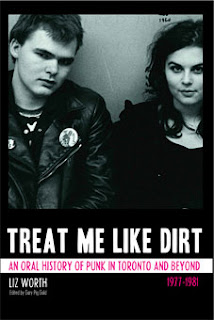 “Treat Me Like Dirt” is an oral history of punk in Toronto and beyond by Liz Worth. It’s an exhaustive tome that goes into the minutiae. It can do this because of the book’s “two column and small font” format. Edited by our pal, Gary Pig Gold – no stone is left unturned. It’s taken me a while to get through it because of the conversational nature of how the various individuals portray what happened. Much of it centres on the destructive nature of The Viletones and in particular Steven “Nazi Dog” Leckie who may have benefited from a good hard kick up the arse at the time. Countered by the more conventional nature of Teenage Head’s relationship with bands like The Dolls and The Groovies, Ontario's scene seemed to mushroom in much the same order as it did in other major cities across the world. Then there was the more avant-rock that Simply Saucer was building. Attempts to acclimatise them to the burgeoning movement were fruitless. I guess it would have been like putting MX80 Sound on at the 100 Club.

In essence, it had more to do with what was happening in the UK than NY per se. This continuum was much more punk. The music was angry and unperturbed by what would eventually become new wave. The Ugly lived up to their name too. I always thought that they were like a proto-oi band but listening to then now, it’s a lot more Alice Cooper/Dead Kennedys. I don’t think that I ever heard The Curse. Some years ago, the Other People’s Music imprint issued a bunch of collections of recordings by some of these bands. I imagine that they’re still available if you scour the web. They don’t seem to be available from that label anymore. The B Girls who also feature, had a similar set "Who says Girls Can't Rock" too.

Anyway, this digest – published by Ralph Alfonso’s Bongo Beat Books – is the best example of its type since Brendan Mullen’s “We Got The Neutron Bomb”. It documents the years 1977 – 1981 in forensic detail with possibly way more information that is absolutely necessary but it’s interesting to read how it chimes with what was happening here for instance.

Don Waller recently, correctly, noted that many of the histories that are becoming available are being put together by people who either weren’t there or that hardly had a ringside seat. This one is the work of people who were in the trenches. They fought in the war that was supposed to put an end to stuff like Muse. Shells raining overhead, the whole nine yards, respect is due above and beyond.

“Treat me Like Dirt” is available in the UK from Proper Books. Or go direct to Bongo Beat.
Posted by Lindsay Hutton at 1:04 PM No comments:

This is great. It includes The Dictators and the word "galumphing". Not together I hasten to add.
Posted by Lindsay Hutton at 8:30 AM No comments:

"my name is john martin and i am putting on art exhibition in mono bar in glasgow on feb 11. the opening night part is on that date and starts at 8pm along with a reggae disco and collection for haiti disaster commitee-free event. the theme is mostly pop art inspired tributes to musical heroes such as ALAN VEGA - POISON IVY - SCOTT WALKER - B.A.D along with early primal scream gig posters (1984-1987) and posters from a mid 80s club called SPLASH 1 where the likes of SONIC YOUTH-23 SKIDOO-WIRE performed-hope you can list this piece of info -much appreciated-thanks john m. "

Posted by Lindsay Hutton at 8:20 AM No comments:

Posted by Lindsay Hutton at 7:31 AM No comments: