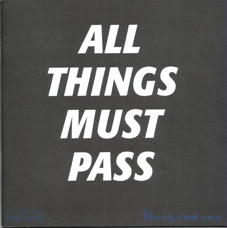 Today is the last day of the final “Le Weekend” in Stirling. James Johnston will be playing with Faust (North) tonight but sadly I can’t make it. Would have liked to have seen Tut Vu Vu also but another conflict. I did spend the day there yesterday though and got there just as the Jean-Herve and Zappi were concluding their presentation. There had been an impromptu performance and some discussion as to how improvised it was seemed to be the subject. I recall the expression “non-linear” being used. Interesting characters...

Wandered around town with the rest of the living dead for a while, with the exception of Europa and The Tolbooth, it’s a pretty depressing place these days. And if you add to that the fact that the last train out is at 11pm then it’s hardly worthy of city status at this point. Of course, in terms of public transport – Glasgow and Edinburgh aren’t much better. Still, after the “cuts” on Wednesday, the UK will be officially to be tarmac-ed over to make way for a giant car park. Wee bit of politics there for a Sunday forenoon.

Couldn’t help but notice the sleeve of Peter Brotzman’s Machine Gun in the bar area. The Tolbooth, in my opinion is a severely underused asset. Probably down to what they’re able to do with what little they’ve got but they really need to make provision for food and draft beer. Like these wee sausages they used to do. Anyway, that’s by the by at this point. Just putting it out there. There are few better venues in Scotland and the main auditorium seating might not be comfortable for the taller person but the facility itself is absolutely fantastic in terms of sound, light and space. Hell, they even have a ghost – right Amy?

Oceans of Silver and Blood & The New String Theory performed their commission in the nearby Church of The Holy Rude. Ideal setting and sound, perhaps a tad hit and miss but I make no claim as to what any of it was about. I prefer to break it down into what i consider cinematic. Wore a hole in my chin by stroking it trying to get a beat on what was going down. Once again the expression improvisation seemed to be evident. Some attendees apparently found the filming of it intrusive, your resident philistine thought it might be part of the performance. Like Bez.

Met Mr Bruce in the Cafe and had a natter that briefly interrupted by a guy called Peter Nicholson who performed on cello and “songs”. It was all a bit Richard Youngs for me but I did like the brief interlude where it sounded like a drunk bagpipe.

Marilyn Crispell and Raymond Macdonald were next up and I kind of dug some aspects of this. Ms Crispell plays the piano in a manner not unlike that which I used to get a row from my granny for. The realisation that I was maybe a child prodigy was almost too much to bear. The less squonk type moments appealed most.

Chris Forsyth upped the ante ext with a brooding Link Wray versus Tom Verlaine via Glenn Philips blues thump. Things were looking up and then Tetuzi Akiyama tore it all down again. I escaped and met up with Stephen and Katrina. Stephen tells me that it seemed like the two had done some kind of role reversal. Usually when I leave or don’t attend something it takes a turn for the better. Mr Bruce told me that on this occasion it did not get better so I was buoyed by that.

Tarwater came on a wee bit late so I missed much of that having to split for the aforementioned train. They were like a bubblegum Joy Division juggling splinters of Empires and Dance era Simple Minds. Pretty good and worthy of investigation. Maybe this being the last “lw” could be reconsidered. It’s a cool gathering of hipsters and the socially inept and consider myself part of the latter category of course.
Posted by Lindsay Hutton at 11:45 AM No comments:
Newer Posts Older Posts Home
Subscribe to: Posts (Atom)