"Former Primal Scream tambourine man (don’t hold that agin him) leaves band in 1987 to pursue adventures in the field of rock and pop art. His creations have been exhibited in a variety of art/music venues to a mixture of excitement and bemusement. These mixed media pieces comprise found items such as gig tickets, 7 inch singles, collage and old frames. Homages to personal heroes such as Muhammad Ali, Alan Vega, The Cramps and Anita Pallenberg are included in this colourful collection." Anybody out there who is interested in finding out more or knows of a place that would be interested in showing these wares then holler and I’ll put you in touch". Alrighty?... 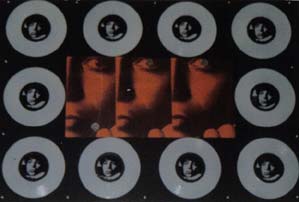 Posted by Lindsay Hutton at 2:27 PM No comments: 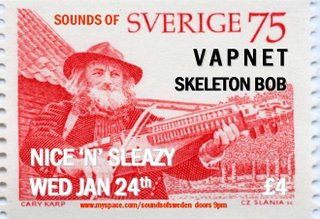 "Vapnet is two boys named Martin and a host of friends with fun instruments like trumpet, trombone, flute, melodica and xylophone. They hail from Ostersund in the far north of Sweden, and they make music to infuse the long, dark winter nights with warm radiance. They are one of the most popular Swedish bands singing in their native tongue, and their debut EP Ge Dom Våld hit the charts and sold out almost immediately. The song Kalla Mig was the single of summer 2005, and debut album Jag Vet Hur Man Väntar (Hybris, 2006) has been rapturously received. But as one Pitchfork reviewer noted in his effusive review, language is relative, and even if your knowledge of Swedish doesn't extend beyond the aisles of Ikea, it's doesn't matter because Vapnet speak fluent pop. "Vapnet conjugate pop's structural and instrumental elements to create brightly melodic, lushly orchestrated music that doesn't let its ambitions or its inventiveness get in the way of setting a perfect mood or having a good time." (full review below) Members of Skeleton Bob also come from the far north - of Scotland. Their reaction to cold, harsh winters, however, has been to look westward, to Texas and the scorched plains of midwest America. The sound has been described as "wistful country-tinged banjo-coustica with mouth organ and flat caps," and it is as warming and filling as a steaming bowl of sweetened porridge oats. "

I don't speak a word of Swedish beyond what I've picked up at Ikea, but that hasn't stopped Vapnet's debut full-length, Jag Vet Hur Man Väntar, from becoming my very own summer album-- despite that drearily overcast cover. It is, of course, closer to Super Furry Animals or Belle & Sebastian than current faves like Lily Allen, Nelly Furtado, or Girl Talk, but the album evokes a distinctive lull particular to these oppressively hot months. So, as I endure the sun and humidity, I like to think Vapnet is really singing about rabbits and swimming holes and first love. Language, after all, is relative. These lyrics obviously mean something to the band members, and whether or not I grasp the finer points of these songs is mostly beside the point, because Vapnet speak fluent pop. As someone who often prizes lyrical boldness over musical innovation, I don't make this claim lightly. Vapnet conjugate pop's structural and instrumental elements to create brightly melodic, lushly orchestrated music that doesn't let its ambitions or its inventiveness get in the way of setting a perfect mood or having a good time. Songwriter and guitarist Martin Abrahamsson and singer Martin Hanberg formed Vapnet as an offshoot of the group Sibiria. In 2005 they released the EP Ge Dom Våld, which in retrospect didn't hint at the complexity of arrangements or the texturing of instruments that highlights Jag Vet Hur Man Väntar. On the full-length, "Ingång" sets the tone with nearly a minute of ambient noise that leads into a wistful ballad titled "Storgatan", whose melody is picked out on bells and tugged along by a simple drum machine and Anna Modin's decorous flute. By contrast, the hand-clapping, finger-snapping "Thoméegrand" is more upbeat, although the expressive guitar riff, out-of-nowhere trumpet solo, ominous backing vocals, and Hanberg's lead maintain the plaintive tone. Jag Vet Hur Man Väntar moves back and forth between the jaunty pop of "Rådhusgatan", the marching pace of "Brunflovägen", and the absolutely killer coda of "Färjemansleden", sung by Modin. As varied as the album is, no song deviates from the album's dreamy tone, although each one seems to expand and complicate the mood. With its piped-in applause suggesting a live experience, the instrumental "E 14" shape-shifts mercurially and false-stops repeatedly, fully revealing the band's range. Vapnet layer indie keyboards over Abrahamsson's distinctive guitarwork and horn fanfares, anchoring everything to real and programmed drums churning out clever disco rhythms. On "Stuguvagen" an amiably shambling verse swells into a gently arching chorus as Hanberg hits the high notes and Abrahamsson's guitar shuffles off into the sunset. These songs confidently strike a delicate balance: they're poppy without being twee, moody without being dark, pensive without being precious. Still, I can't deny that I've been tempted to look into translating these lyrics, to find out what these songs really mean. But after spending a few evenings on my back porch drinking Shiners, watching fireflies, and listening to Jag Vet Hur Man Väntar, I've come to the conclusion-- a minor breakthrough for me -- that I don't really need to know what these songs are about. I understand them enough to enjoy them as they sound. - Stephen M. Deusner, July 27, 2006
Posted by Lindsay Hutton at 12:46 PM No comments:

"todays word is 'dejected'"... and that's because the post-person never brought the Säkert! product like I kind of hoped.

Posted by Lindsay Hutton at 12:01 PM No comments: 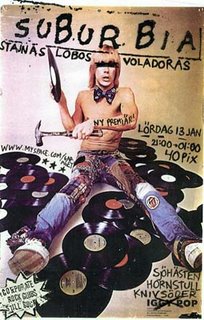 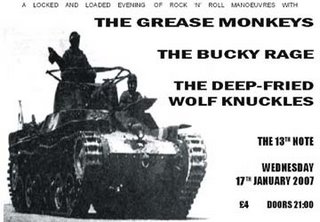